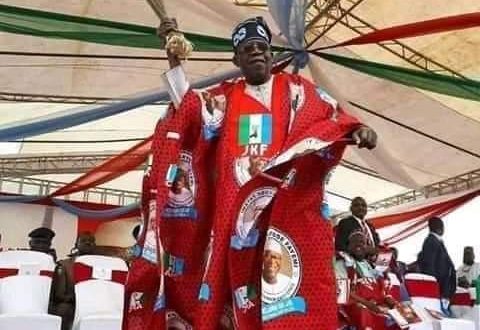 Tinubu speaks on crises rocking APC, ‘It’s all about 2023’

“I am still looking for any National or State Chairman of any political party whether ruling or not that has completely solved all the problems in the party. Even if the party is just a week old.

The Chairman has been a tireless campaigner and mobilizer for the party. He has steered the party through difficult elections. His contributions should not be undervalued now that the bulk of elections are behind us.
To do so would be an act of ingratitude.
The [coup] plotters launched their attack solely because they perceive the chairman as an obstacle to their 2023 ambitions.

In a well-structured society, people come to understand that the time for politics is seasonal; it is periodic. The responsibilities of governance are what are perpetual. Many of our politicians sadly have inverted this reality.

We even had a National Deputy Secretary improperly calling for an NEC meeting on the basis that he believed himself to be the acting National Chairman.

Clearly, this man would not have summoned the temerity to make such a move had he not been instigated by powerful individuals, whom he thought would reward or, at least, protect him for committing the wrongful act.

We must rally around President Buhari. Instead of everyone saying they are working for the party and nation but going their separate ways based on their selfish designs, we must help him build a stronger national consensus on policies that will ensure safety and bring greater prosperity.

Many of us expended sweat, tears, toil and sleepless nights to build this party. Our personal sacrifices were not insignificant. We built this party not simply as a vehicle for personal ambition. We built the party because we saw it as perhaps the only enduring hope to bring progressive governance to this nation.

Those who now seek to abuse the party by using it as their personal device do it great harm. They should not be allowed to sacrifice this collective enterprise at the altar of their self-aggrandizement.

To be an APC member means more than merely carrying a membership card. It means to believe in a set of ideals and principles geared to our highest purpose as a party and a nation. –

Previous How Buhari dumped Oshiomhole strategically
Next Ajimobi’s death is a loss to Yoruba race. – Tinubu