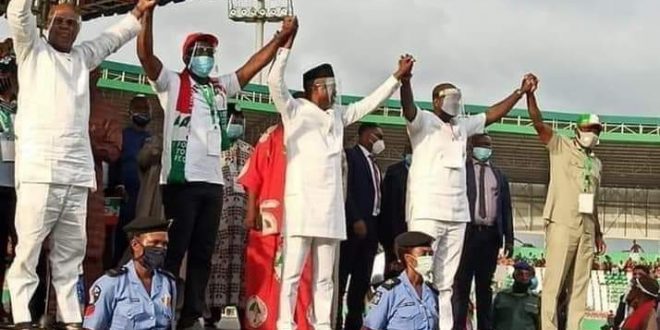 A former governorship aspirant of the Peoples Democratic Party (PDP) in Edo State, Kenneth Imasuagbon, has said he stepped aside for Governor Godwin Obaseki because he wants “godfatherism to be defeated.”

Mr Imasuagbon also said Governor Obaseki’s performance as the leader of Edo State inspired him to set aside his ambition.

He said this on Thursday during the PDP Governorship primary election in Edo State, held in Benin City, adding that he wants Obaseki to continue his impressive work.

According to him, he has been a “victim of godfatherism” and will help the Edo leader fight anyone who wants to “enslave” the people of the State.

“I am a victim of godfatherism,” he said, stressing that “when I saw Godwin standing up to challenge the actions of one godfather who wants to enslave everyone in Edo State, I said no, if need be, I will submit to Governor Obaseki.”

Mr Imasuagbon equally admitted he is squashing his ambition for the sake of the people of Edo, the growth of democracy and the party.

“I hereby step down my ambition because of these reasons I have given,” he explained, adding that he has is now raising his “support for Godwin Obaseki.”

He is the third candidate to withdraw from the race after Governor Godwin Obaseki joined the PDP from the All Progressives Congress.

Earlier, Imasuagbon had vowed that he would never step down for anyone.

Previous Lagos has highest Covid, Nigeria nears 23,000 Cases
Next Another Pastor arrested for rape in A/Ibom