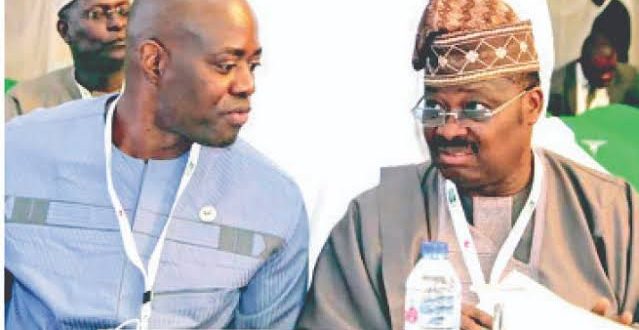 As  Muslim, his remains out to have buried before now .
The delay in burying the remains of former governor of Oyo State Abiola Ajimobi has become an object of controversy between his family and the Oyo State Government.

A source close to the family had claimed that failure of Governor Seyi Makinde to grant approval for the burial of his predecessor was the reason behind the delay. But the governor described the claim as a wicked lie.

Ajimobi died on Thursday. His remains should have been buried by Friday according to Islamic injunctions. But as a former governor, the family needs the approval of the governor for his remains to be buried.

A source said Makinde was tactically delaying his approval, a situation that has frustrated the government officials handling the procedure.
The source added that the governor also refused to approve the family’s preferred location for the bury in spite of interventions of notable Nigerians.

Another source close to the family confided in The Nation that neither Governor Makinde nor his representative has visited the family’s Ibadan home to commiserate with them.

Ajimobi was the governor of the state from 2011 to 2019. He was the Acting National Chairman of the All Progressives Congress (APC) as at the time of his death.

But denying the claims, Makinde in a statement by his Chief Press Secretary Taiwo Adisa said: “In view of the intense enquiries from news media organisations  regarding the perceived delay in burying the late former Governor of Oyo State, Senator Abiola Ajimobi, the Oyo State Government wishes to place on record that there is no truth in the rumour making the rounds that the burial is being delayed by the state government.

“The rumour, which is being deliberately spread to give the state government a bad name  and to play undue politics with the dead, initially came by the way of social media gossip, which gained traction to attract the attention of traditional media outfits

“Several media outfits reached out to the Media Office of the Governor of Oyo State to make enquiries  on this barefaced lie on Saturday.

“Let it be stated clearly that the Governor of Oyo State, Engineer Seyi Makinde, has played no role at all in causing any delay whatsoever regarding the burial of his immediate predecessor, Senator Ajimobi.

“The truth of the matter is that the family, through a proxy, approached the state government and sought approval to bury the late governor on a plot of land at Agodi GRA, which is currently under litigation.

“Incidentally, it was the same former Governor Ajimobi who instituted the legal action.

“Governor Seyi Makinde had no choice than to state the facts as they are to the emissaries and turn down the request.

“Governor Makinde, however,  against the established land use rule in Oyo State, gave approval that the family can bury the late governor in his Oluyole Estate residence.

“It is to be noted that the rules guiding land use in Government Reservation Areas (GRA) forbid the burial of bodies in such locations as Oluyole Estate and Agodi GRA.

“Let us also put on record that whereas the family did not follow the laid down protocols in passing information on the sickness and eventual demise of  Senator Ajimobi, Governor Makinde overlooked all that and directed the full cooperation of the government with the family on this matter.

“It can only amount to a wicked lie to insinuate that the incumbent government in Oyo State attempted to obstruct the burial of the immediate past governor.”