Home » Trending » Business » Hidden secrets on that 48 plots of land in Ibadan uncovered ! 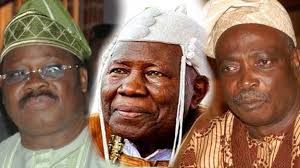 Hidden secrets on that 48 plots of land in Ibadan uncovered !

The land that is causing dispute between them.
1) When former Governor Ladoja was in power. He bought it from Oyo State government. Perfect all the documents.

2) Ladoja was impeached and Akala seized the land and give it to Aare Arisekola .

3) One night , when Ajimobi became governor, He came to Arisekola and said Jokingly, Aare ile yin ti Bayo Akala fun yin yen , e bun mi . He got the information from ministry of land about that land and his hatred for Governor Rasheed Ladoja was imaginable. He wanted the land badly to spite Former governor Ladoja.
And trust Aare Arisekola, he asked one of his sons to bring the documents of the said land and handed it over to him. Which include survey and Plan. Aare was not yet perfected the documents then.
So Ajimobi collected the documents and started building a multi billion retirement home there. How he became multi billionaire within his 8yrs in power is still a mystery till now. When he wanted to contest against Akala in 2007 and Rasheed Ladoja was the governor then, he came to see Governor Ladoja at Agodi government house with his confidant, Wole Arisekola .
They both rode in Wole Arisekola’s Pajero’s jeep to secretariat. Governor Ladoja, Late Ajimobi and Wole Arisekola went to a small room inside Governor Ladoja ‘s office. Ladoja asked all the staff in his office to leave . They locked themselves in the room for almost 3 hrs. Remember Ladoja was in PDP and Ajimobi was contesting against a PDP candidate. After their meeting, three of them came out laughing. They planned coup against their enemy who is not from Ibadan like them.
Ladoja instructed that we should Package N100M in five places and give it to Ajimobi to support his candidature.
These story can be verified from Mr Dotun Oyelade and Mr Wole Arisekola.
Immediately Ajimobi became governor, he did everything within his power to send Ladoja to prison. He dissolved Olubadan traditional council to stop Ladoja from becoming Olubadan of Ibadan Land.
Chief Rasheed Ladoja is third in rank to Olubadan of Ibadan.
Not to waste, your precious time. The aforementioned land became litigation when he left office . He is building a gigantic property that doesnt belong to him. He was so particular on that land despite the fact that he stole thousands of hectares of land for himself from Oyo State government. I hope Governor Seyi Makinde will now recover the masses properties back to the government. So Ajimobi took Ladoja and Oyo State to court that the land belongs to him but lost.
His wife wanted to use sentiment to get sympathy to lay claim to what they cannot account for.

Tags Hidden secrets on that 48 plots of land in Ibadan uncovered ! slideshow