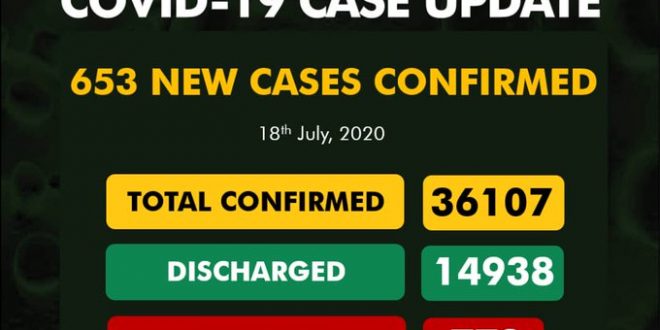 The total number of coronavirus (COVID-19) cases in Nigeria has exceeded the 36,000 mark.

This follows the confirmation of 653 new infections by the Nigeria Centre for Disease Control (NCDC) – the health agency saddled with such responsibility in the country.

Giving an update on the outbreak of the disease in a late-night tweet on Saturday, the agency revealed that the new cases were reported across 27 states and the Federal Capital Territory (FCT).

Only nine states did not report a new case of COVID-19 in the last 24 hours.

As the epicentre of the disease in the country, Lagos reported 115 more cases, followed by Kwara, Enugu, and the FCT which recorded 85, 80, and 78 new infections respectively.