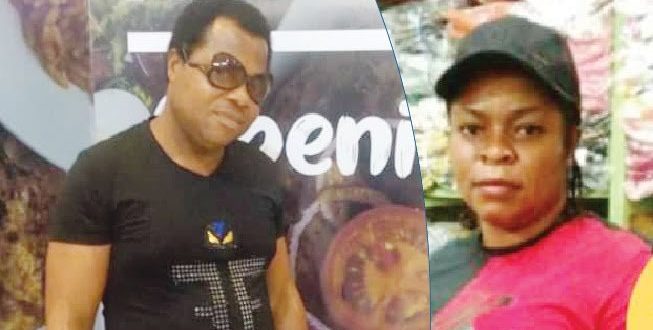 A three-year relationship between two live-in lovers on Adekunle Street, Oshodi, Lagos State, has come to a tragic end after one reportedly killed the other.

The suspect, Ifeanyi Nwagboroga, allegedly hacked the victim, Faith Ebubeeze, with a cutlass, leaving her in a pool of blood and fleeing the scene.

City Round learnt that the couple were at loggerheads recently over their plan to get married to each other after a long courtship.

A source has said the estranged lovers sold clothes at Arena market, Oshodi and Yaba.

He explained that they lived in a flat on the last floor of a two-storey building behind a bungalow in the compound.

He said, “The woman should be in her 30s. She rented the apartment three years ago and both of them were living together as a couple. They related very well with each other and nobody suspected anything was wrong. In fact, the woman just bought a RAV 4 (a brand of Toyota SUV). It was after the incident that her sister who was living with them told us that they had been having issues.

“I learnt that they went for a family meeting to discuss their wedding. They decided to end the relationship because he said he was not ready. The man was supposed to leave the house the same week the tragedy occurred. He asked her to give him N400,000 but she told him to be patient. They were on the issue when the incident happened around 6pm that day.”

A tenant, who spoke on condition of anonymity, said neighbours did not know something had gone amiss until the victim crawled to the balcony and called for help.

He explained, “Her sister who was living with them had gone to buy something in the market. It was someone who heard her calling for help that alerted people. She could barely talk at that time and she was naked.

“She had deep cuts around her two wrists which she probably sustained while she was trying to defend herself. A piece of cloth was used to cover her mouth but by the time she got to the balcony, she had managed to get it out. We rushed her to hospital but she died on arrival. She had lost a lot of blood.