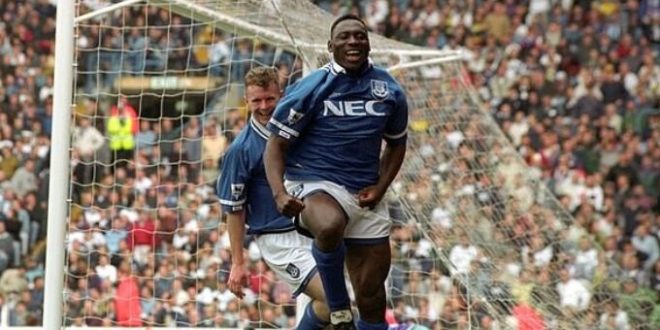 Daniel Amokachi, former Super Eagles forward, has recounted how he told a lie to force himself into a match without his coach’s consent during the 1995 FA Cup semi-final clash between Everton and Tottenham.

Everton had looked comfortable going 2-0 up, courtesy goals from Matt Jackson (35) and Graham Stuart (55) but a controversial penalty, which was converted by Jurgen Klinsmann, had given the Londoners a lifeline.

Paul Rideout, Everton striker, had suffered a knee problem and was being assessed by the medical team, only for the Nigerian to force his introduction into the game — much to the chagrin of Joe Royle, his coach.

Amokachi said he told one of the coaching staff that he was instructed to come in by the manager for the injured striker.

Although the gaffer was not happy, Amokachi, who came on 20 minutes left on the clock, scored twice as Everton saw off Tottenham in a 4-1 drubbing.

Amokachi’s late double against Spurs sent Everton through to the FA Cup final, where they beat Man United to lift the cup in 1995

“I told Jimmy Gabriel, who was in charge of subs, that the gaffer had said I was to go on. Jimmy gave the paper to the fourth official and I ran on the pitch,” Amokachi told Daily Mail UK.

“I turned just as the gaffer was running towards the sideline shouting “what the hell are you doing?” Poor Jimmy was left to explain.”

The coach, however, maintained that it was the best substitution he never made.

“Well done Daniel,” Royle told Amokachi after the match. “But if you ever try that s*** again and you’ll be finished.”

In August last year, President Muhammadu Buhari appointed the 48-year-old as his special assistant on sports.