Find the latest bookmaker offers available across all uk gambling sites www.bets.zone Read the reviews and compare sites to quickly discover the perfect account for you.
Home » Entertainment » Celebrity » Lagos govt not freezing One legged lady’s #25 m, hands her over… 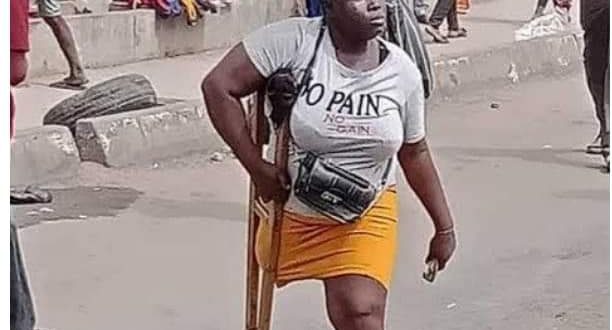 Lagos govt not freezing One legged lady’s #25 m, hands her over…

Lagos State Honourable Commissioner for Information and Strategy, Mr. Gbenga Omotoso has dispelled rumours making the rounds on the social media that the State Government was planning to deny the One-legged pure water seller lady, who has raked in a whooping #25 million through Go-fund-me on the social media.

Answering reporters’ questions on Star FM early Thursday morning, Mr. Omotoso stated categorically that the State government has no plan of denying the lady of her huge donation.

He stated that all the the State government has done is that the 26-year old amputtee remains unmolested and very safe to do whatever she intends to do with the money that she has so far raised in Lagos,

Assuring that the State government had handed her over to the lady’s Kogi Community in Lagos as well as Irede Foundation to guarattee her safety.

Omotoso stated that she is free to set up her dream supermarket store in Lagos State since it was here in Lagos that fortune smiled on her..

“That is a confirmation Lagos State is a land of hope and opportunities,” the Information and Strategy Commissioner asserted.

While handling Mary Daniel, the amputee sachet water hawker, to the leader of the Igala (Kogi State) community in Lagos State.

The Special Adviser, Office of Civic Engagement, Princess Aderemi Adebowale, disclosed that the State government will continue to protect all residents in the state, especially the vulnerable.

Recall that the amputee, whose story has attracted widespread attention, particularly in the social media, has been in the safe custody of the State government in the past two weeks.
Princess Adebowale said the government took the step to shield Daniel from possible fraudsters who may target the funds donated to her by well-meaning Nigerians.

According to the Special Adviser, the ultimate desire of the State government is to ensure that Daniel becomes a civically responsible citizen in the State, adding that “she now has the resources to take care of herself and her baby and have a new lease of life”.

Daniel was handed over to a Committee comprising of the representatives of the Ministry of Justice, Ministry of Youth and Social Development, a Non-Governmental Organization (NGO) and the Leader of Igala community in Lagos State, Mr. Sanni Yakubu Ejima in the presence of the Divisional Police Officer, Alausa and representative of the Commissioner of Police, Lagos State Command.

The Special Adviser, while handing over Daniel to the Leader of the Igalas in the State, explained that the police were brought in to the handing over to demonstrate that the state had taken good care of Daniel while in its custody and to ensure her safety thereafter.
Adebowale added that the Committee is to oversee Daniel’s rehabilitation and ensure that the donated funds are judiciously utilized in the improvement of her standard of living and that of her baby.

Tags hands her over… slideshow. news