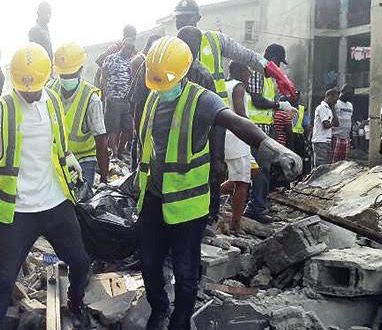 Tragedy struck at the Mounted Troops Police Barracks, Ikeja, Lagos on the early hours of today when one of the dilapidated building fell and crushed a 14-year-old girl simply identified as Peace to death while asleep.

The building which was still occupied by policemen in Lagos was affected by the torrential rain that fell at about 2am in the morning.

According to a family source, the father who is a police corporal lives in the affected building which is a two-bedroom bungalow. At about 2am when the rain started the policeman, his wife and four daughters gathered at the palour due to how windy the rain was.

Minutes later, hoping that all is well, he encouraged the girls to go back to bed as the rain had subsided.

In less than ten minutes he heard a loud sound and assumed that it could have happened outside when suddenly the girls started screaming.

He raced to the room and was able to drag three of the girls out with minor injuries. It was when he waited and Peace that is 14 did not run out from the dark room or call for help, he went back with a torch light and found her death with her head completely crushed by the pillar that fell into the room.