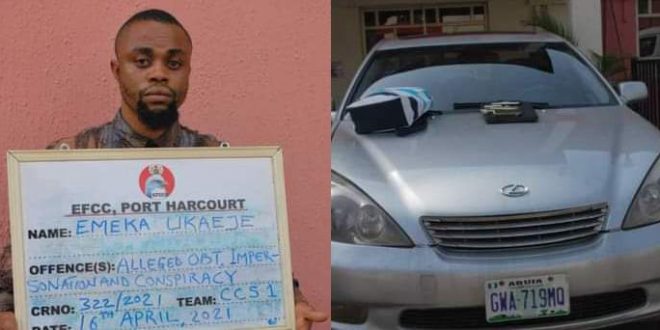 Emeka who was arrested on April 16, 2021, at Rumukparali, Ozuoba, Port Harcourt, Rivers State by the Economic and Financial Crimes Commission, EFCC also operates a human organs bank and sell to willing buyers in Nigeria and other parts of the world .

There are fears that the syndicate may also be involved in obtaining the organs using dangerous tactics .

The EFCC tells the Scary Tale…
“He was arrested by operatives of the Commission based on established intelligence on his suspicious fraudulent internet dealings.

One of the tactics they use in getting victims is to go around advertising fake vacancies and giving well fenced and impregnable houses as addresses as interview venues.

Preliminary investigations by the EFCC showed that the suspect is leading a syndicate of fraudsters falsely presenting themselves as medical doctors, with a human organ bank, particularly kidneys for sale and purchase.

Victims of the syndicate include people with renal disease and even healthy people desirous of selling their organs in Nigeria, India, Pakistan, Indonesia and United Arab Emirate.

Previous Buhari cries out : “Some people are mercilessly against this country”
Next NCC boss hails S/Court verdict on Local Govt autonomy, schools Makinde