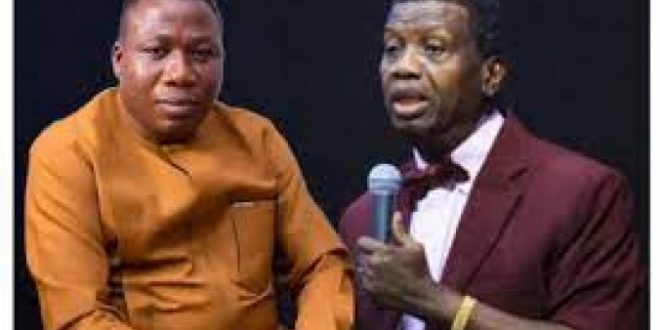 Sunday Igboho may have stirred an honest nest with the comment..

Already many are speaking up against him for mocking the death of fellow human!

He said : “God Will Keep Destroying Family of Those Pastors and Leaders Who Do Not Support Us In Our Struggle”

He believed that he has arrived because of the little money he has in his bank account and he can now talk to people anyhow.

He should be careful because even his juju cannot save him; Sunday Igbogho is going beyond his boundary now and should be called to order.

Only one pronouncement against him will send him into spiritual and physical exile forever.

“I therefore, want to urge him to go back to school to read, and to learn how to talk to elders…because from the three of his videos that I have watched, he is a stack iliterate with infintesimal reasoning.

Many others cautioned him for showing disrespect to the bereaved. David Ewetan said: “Death knows neither the strong nor weak, faithful or unfaithful… After he mocked a mourning father, hope Yoruba nation will save him and his family from their own death? Those words from him are void of class. Everything is not about politics.” Agbolade Segun stated: “When you believe too much in charms, you begin to lack empathy and misbehave… Thinking you’re something when you’re just ordinary dust. Lack of knowledge is a cancer.” Emmanuel Adejare argued: “Mr Sunday, you are not God, and Pastor Adeboye would never join words with you.. He is not stopping you from getting Yoruba Nation so why all this mess? My people perish bcos of lack of wisdom.. you are not bigger than God.” Dasola Adeyemo lamented: “This is just too much, not even at a grieving period like this. Not publicly announcing or talking on social media means one is not supporting Odua Nation. Pls bro mind your speech.” Adebayo Adejumo noted: “People should ignore this uncouth simpleton. This is not in our (Yoruba) culture to deride the bereaved and subject them to barbarity of this magnitude. “Even if The Adeboyes are his sworn enemies, it won’t amount to this vituperative recklessness. Does he, Igboho knows what would be of him the next second? This is what we get in a society that is so deprived of responsible characters.” Gabriel Omowonuola said: “You want Yoruba nation you relocated your wife and children to overseas. Bring them back to Ibadan and the rest of us go follow you.” Johnson Nwachukwu tweeted: “Honestly Sunday igboho miss fired in this one, even in a battle respect are accorded the dead on the enemy side because death smiles at all of us.”

An online influencer also added “Sunday Igboho should be extremely careful. A word is enough for the wise.

This is pure madness on his part. He should seek redress on this nonsense immediately.