Find the latest bookmaker offers available across all uk gambling sites www.bets.zone Read the reviews and compare sites to quickly discover the perfect account for you.
Home » Entertainment » Celebrity » Calls for probe as bridge collapses a week after construction in Kogi 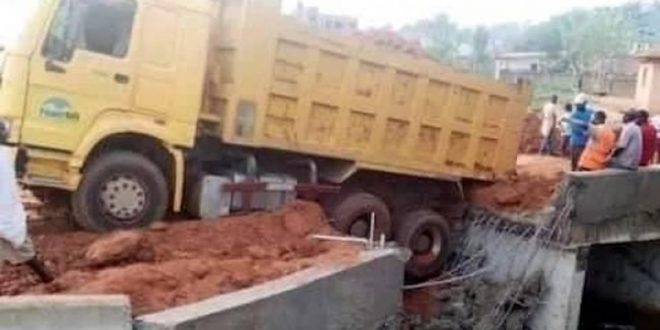 The multi-million Naira Ozuma bridge constructed by the administration of Governor Yahaya Bello in the Central Senatorial District of Kogi State has collapsed in less than a week of its construction.

In a statement signed by the Director, Media and Communication of the Peoples Democratic Party, PDP, in the state, Comrade Dayo Onibiyo, the party said the Ozuma bridge in Okengwe, Okene was alleged to have been constructed with substandard materials that gulped several millions of naira.

He said this is another wasteful scheme better described as a conduit pipe that had exposed road users’ lives to unnecessary dangers.

“We, therefore, advise Yahaya Bello to borrow a leave from the PDP in the state on how it successfully completed the notorious Meme bridge and others without exposing the lives of good people to any danger,” he advised.

He called on the Standard Organisation of Nigeria (SON) and Nigerian Society of Engineers (NSE) to come to the aid of the people of Kogi State to investigate the failed bridge to avoid other impending dangers to human lives arising from the construction of substandard projects and to ensure that standards are complied with.

We are afraid that the ongoing flyover under construction at Ganaja junction, Lokoja is a heavy risk…if a mere bridge can collapse under a week of its assumed completion by the same government,” according to the statement.

Reacting to the failed bridge in Ozuma, the state’s commissioner for works and housing, Engineer Abubakar Ohiere, dismissed the allegations raised by the PDP in the state, saying it is untrue.

He explained that the collapsed bridge was due to the overzealous act of the company’s truck driver who violated the curing period of the project.

Ohiere stressed that all necessary standards were observed, saying the collapse was not as a result of engineering failure.

According to him, the bridge would be reconstructed by the company

Tags Calls for probe as bridge collapses a week after construction in Kogi slideshow. news