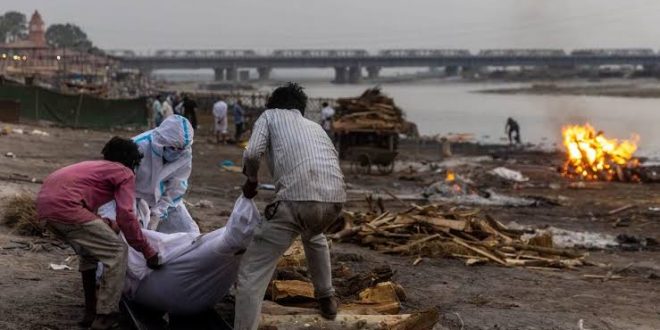 Dozens more bodies have washed up on the banks of the Ganges in northern India as the country struggles with a second COVID wave.

More than 50 bodies have been discovered in Gahmar, Uttar Pradesh over the past few days.

On Monday, at least 40 bodies were pulled from the river some 55km (34 miles) downstream from Gahmar.

How the bodies got there is unclear, but it is thought they are Covid-19 victims. Their identities are unknown.

On Tuesday, a local journalist told BBC Hindi that bodies have been washing up on embankments in the village of Gahmar for several days.

Locals claimed they had been complaining about the smell for the past few days but authorities had only taken action upon hearing the news about the bodies found downstream in the state of Bihar on Monday.

Police in Gahmar have been pulling bodies out of the river with sticks. About 25-30 heavily decomposed bodies have been pulled out and buried since midnight.

Ghazipur District Magistrate MP Singh said an investigation has been launched into how the bodies got there, NDTV reports.

“We got the information, our officers are present on the spot and an investigation is under way. We are trying to find out where they came from,” he said.

On Monday, officials confirmed at least 40 bodies had washed up on the banks of the river in Buxar, on the border between Bihar and Uttar Pradesh states.

Some media reports said as many as 100 bodies had been found, and that their condition suggested they may have been in the river for several days.

An official said the remains would be buried or cremated.

A second wave of the virus is ravaging parts of India, with deaths rising significantly in recent weeks. Most of the country’s crematoriums have run out of spaces.

India is now the epicentre of the global pandemic and has recorded more than 22 million cases and 249,992 deaths.

However experts believe the real death toll could be far higher.

This is not the first time bodies have floated up in rivers in India during a pandemic.

“The River Ganga was swollen with dead bodies”, the famous Hindi language writer and poet, Suryakant Tripathi, better known as Nirala, wrote about the 1918 outbreak of Spanish flu in his village in a province which is now India’s Uttar Pradesh state.

The writer himself lost his wife and members of his family to the flu, which killed between 17 and 18 million in India alone, more than all the casualties in the World Wars.

A report on the pandemic by British official Norman White reported that “numberless bodies were thrown into the rivers of the province” since supplies of firewood to cremate were scarce.

“The Ganga, lifeline of major civilisations, flowed with death in its midst. So great was the problem that, along with managing the flu, medical authorities had to ensure that water purification systems of cities along the clogged rivers worked well and that no harm was done by this ‘most objectionable practice,'” writes Chinmay Tumbe, an economist, in his book The Age of Pandemics

Previous Calls for probe as bridge collapses a week after construction in Kogi
Next Buhari changes strategy, gives marching orders to service Chiefs