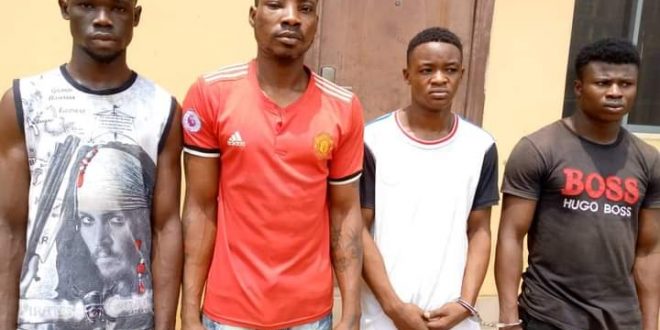 Four members of a suspected kidnap-for-ransom syndicate have been smashed in the Otta area of Ogun State.

The ugly scenario began with one of the suspects, Abbey Fagbemi, 20, accosting the victim at Iyana-Iyesi in Otta, at about 6:30pm on May 6, 2021, apparently hypnotized and took her to the residence of another member of the gang, Adekunle Basit, 20, at ‘Cele’ area, opposite Honda Company in Otta.

The victim was on an errand for her mother when she ran into Abbey’s web.

Crime Puzzle gathered that it was in that process that the other two members, John Nelson, 21 and Adeleke Ayotunde (aka AY), 29, were connected, and they all took it up as a veritable source of making fortune from the girl’s abduction.

They, thereafter, put a call across to the victim’s father, demanding for N500,000, “if he ever wanted to see his daughter again”.

While the suspects were overwhelmed by the illusion that in a matter of hours, the girl’s relatives would raise the ransom, the father, Adejuwon Odunowo, instead, headed for Onipanu Police Division, where he lodged his complaint, disclosing to the Police that the abductors had threatened him of losing the girl if he failed to meet up with their demand.

The Ogun State Police Public Relations Officer (PPRO), DSP Abimbola Oyeyemi revealed in a press statement made available to Crime Puzzle that, “Upon the report, the DPO, Onipanu Division, CSP Bamidele Job, detailed his crack detectives, to embarked on intelligence and technical based investigation, to unravel those behind the devilish act”.

According to the PPRO, two days after, May 8, one of the suspects, Abbey Fagbemi, was tracked down in “Cele” area of Otta, leading to the arrest of John Nelson and Adeleke Ayotunde in a factory within Otta.

“It was then discovered that the victim was held captive in the Adekunle Basit’s room in the same ‘Cele’ area, where the girl was rescued unhurt and reunited with her family”, the PPRO stated.

The Police spokesman stated further that the state Commissioner of Police, Edward Awolowo Ajogun expressed satisfaction over the quick response of his men to the incident, and has ordered the immediate transfer of the suspects to the Anti-kidnapping Section of the state Criminal Investigation and Intelligence Department (SCIID) for discreet investigation and prosecution.

The CP also appealed to members of the public, to adhere strictly to the various security advices given by the Command, in order not to fall victim of kidnap syndicates.