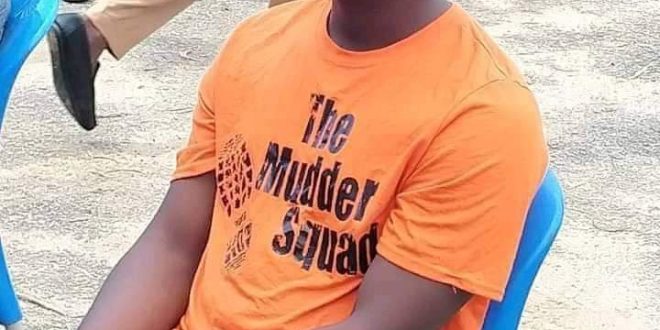 Already referred to on social media as charade of a press briefing by Uduak Akpan and Akwa Ibom CP.

“This is a very sad development and no one should make any capital from it.

But the Akwa Ibom State Police command did not rehearse very well before they acted the movie that just ended a few minutes ago.

The self-confessed killer is being given something close to a VIP treatment.

He came out fresh, well-fed and spotting a beautiful T-shirt and rested comfortably on a blue plastic chair.

He exuded a world-class confidence and sits like someone who is just visiting the police station to answer a few questions and will soon hit the road back home.

He gave a narrative that is almost at variance with what the CP, Police PRO, Uruan LG chairman and Kufre Effiong have said at different times.

While he admitted he didn’t rape Iniobong, he managed to admit that she agreed to a consensual sex but became violent suddenly and hit him on the head with a stabiliser when he brought out a condom.

He claimed he bled but there is no wound anywhere on his head or any part of his body, including the finger he said Iniobong gave him a bite.

While his encounter that led to Iniobong’s death was consensual sex, he managed to admit that he has raped six other girls in a similar way.

He wears a T shirt with an inscription, “Mudder Squad,” a veiled term for Murder Squad by gangsters.

That is apparently an indication that he is into the act of murder or the shirt is emblematic of his group and what they do.

I would have loved him to name the girls he had hosted in his infamous job interviews given the number of women who have come out to talk about how he violated them and how his family members are accomplices to what he does.

It seems the rehearsal Uduak got wasn’t effective or he forgot his lines and made a mess of so many things.

I was shocked the CP said the shallow graves which my reporter saw and recorded are mere yam holes.

The last has not been heard about this disgusting tale. I urge all Nigerians who love justice to come together and provide a platform for sharing data and information on this crime and others that might have been committed by Uduak Akpan, his gang and sponsors.