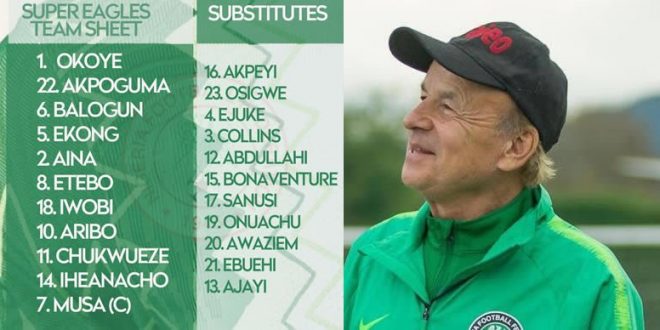 Super Eagles will play their Mexican counterparts in an international friendly at the 77,500-capacity Los Angeles Memorial Coliseum, California, United States of America on July 3, The PUNCH reports.

This was disclosed in a statement by the Communications Department of the Nigwria Football Federation, which was made available to our correspondent on Wednesday.

NFF’s FIFA match agent, Jairo Pachon of Eurodata Sport said, “We are happy to be able to announce this match, which is a clash between two very big teams from two different continents. Mexico against Nigeria is a big match any day and the venue is class.”

The Mexico friendly comes a month after the Eagles play rivals Cameroon at the Wiener Neustadt, Vienna, Austria on June 4.

According to BBC, the NFF is faced with a financial crisis and owe Rohr six months salary, while players’ have not been paid bonuses and allowances in full.

“The financial problems during this pandemic have affected our sponsors hence their inability to pay,” an official, speaking on condition of anonymity, told BBC

The July game would be the sixth time Nigeria would play against the North Americans.

Four of their previous five clashes ended in draws, with the only win coming Mexico’s way – a 2-1 victory in the US Gold Cup in Dallas, Texas June 24, 1995.

The match will be held at 3:30am July 4 Nigerian time.