Find the latest bookmaker offers available across all uk gambling sites www.bets.zone Read the reviews and compare sites to quickly discover the perfect account for you.
Home » Entertainment » Celebrity » After Ayade, Abia, Zamfara govs set to declare for APC 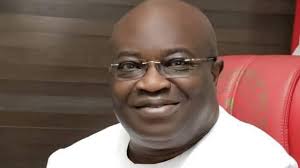 After Ayade, Abia, Zamfara govs set to declare for APC

Following the official defection of the Governor of Cross River State, Professor Ben Ayade from the Peoples Democratic Party (PDP) to All Progressives Congress (APC) , his colleague, the Governor of Abia state, Dr Okezie Ikpeazu is set to formally join the APC

Amidst defection rumour, Zamfara governor too played host to APC governors early April this year.. and the rumour has not been dispelled.

Zamfara governor did not appear to want to quell it when he praised the APC delegation for visiting Zamfara when his own PDP colleagues have not.

The visit, during which the governors announced a donation of N50 million to the victims of the disaster, comes amidst continued speculations that Mr Matawalle plans to move from the Peoples Democratic Party (PDP) to the APC

The several months speculation of defections of Umahi, Ayade and Ikpeazu to the APC has seen Umahi and Ayade officially join the APC, setting the stage ready for Ikpeazu

A serving commissioner in Ikpeazu’s government shortly after Ayade’s defection on Thursday revealed to our correspondent that Gov. Ikpeazu has concluded plans to join his former party men to the APC.

Ikpeazu’s reason for defection is connected with his ill treatment by the defacto governor of the state.

The visiting governors during Ayade’s defection were Mai Mala Buni of Yobe, Atiku Bagudu of Kebbi, Hope Uzodinma of Imo, Simon Lalong of Plateau, Badaru Abubakar of Jigawa and Kayode Fayemi of Ekiti.

With his defection, Mr Ayade becomes the only APC governor from the South-South geopolitical zone.

The ruling party had lost its only governor in the zone last year when Godwin Obaseki of Edo crossed to the PDP months to the governorship election in that state. He won reelection on that platform.

With Mr Ayade in the kitty, the APC now has 21 governors, the PDP 14 and the All Progressives Grand Alliance (APGA) one.