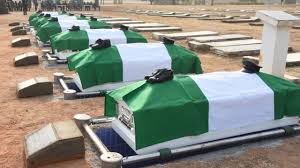 Around 6pm on Friday May 21,2021 news broke of a military aircraft crash in Kaduna.

Ibrahim Attahiru, chief of army staff, was one of 11 persons killed in the crash.

The time of this report, the cause of the crash was not known.

The crash makes it the third time a military aircraft will be involved in a fatal accident within the past three months.

THE NAF 201 CRASH AFTER ‘ENGINE FAILURE’

On February 21, Hadi Sirika, minister of aviation, announced that a military aircraft crashed in Abuja.

“A military aircraft King Air 350 has just crashed short of our Abuja runway after reporting engine failure en route Minna,” he had tweeted.

All the seven passengers on board Athe aircraft died.

Ibikunle Daramola, director of public relations and information of the Nigerian Air Force (NAF), said the chief of air staff had ordered an immediate investigation into the incident.

Months later, not much has been heard on the outcome of the investigation.

THE BORNO JET THAT WENT OFF RADAR

The jet was on course to offer air support for ground troops fighting Boko Haram insurgents, but the aircraft and two officers on board never arrived at their intended destination.

The pilots were later identified as John Abolarinwa and Ebiakpo Chapele, both flight lieutenants with the air force.

As of April 26, the air force had promised to update the public as soon as it concluded investigation into the incident.

However, the cause of the crash remains unknown.

Speaking on the latest incident on Friday, Edward Gabkwet, NAF spokesman, said the “immediate cause of the crash is still being ascertained”.

Attahiru was in the company of six army officers, and four crew members.

“They were almost landing when the aircraft lost its balance and crashed inside the bush,”

With the Friday incident, the Nigerian military has lost 20 officers to aircraft crashes within a space of three months