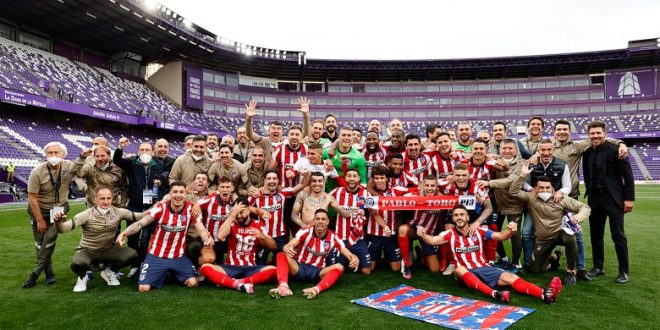 Atletico Madrid have emerged as the LaLiga champions for the 2020/21 season after a dramatic final day in Spain on Saturday.

Diego Someone’s men had to come from behind to beat Valladolid 2-1 thanks to goals from Angel Correa and Luis Suarez before they were crowned 2020/21 LaLiga Santander champions.

The defeat meant Valladolid had their relegation to the Segunda Division confirmed. Even a win, though, wouldn’t have been enough as Elche managed a 2-0 defeat of Athletic Club.

This is the first time since 2014 that neither Barcelona nor Real Madrid will be winning the Spanish LaLiga.

This is Atletico’s 11th league title as against 34 for Real Madrid and 26 for Barcelona, the most successful clubsides in Spanish history.

In the other Saturday games, Real Madrid needed a late goal to beat Villareal 2-1 on their home ground.

While Zinedine Zidane will be happy not to end the season on a losing note, it was not enough to help their course in successfully defending the LaLiga crown won last season.

Elsewhere, Barcelona also ensured they ended the season on a winning note; beating Eibar by a lone goal away from home.

Real Betis also recorded an away win in the final day of action in the LaLiga as they edged Celta Vigo 2-3 in a five goal thriller.