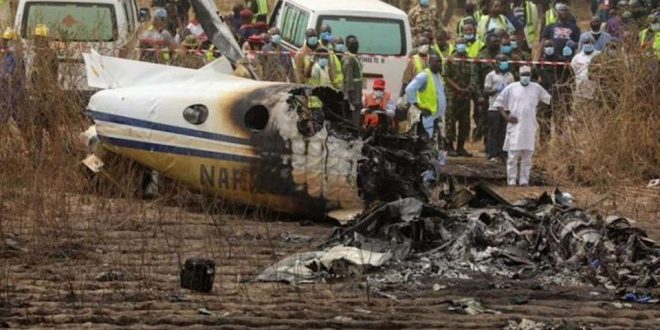 The death of the officers on Friday increased the number of military personnel, who died in crashes involving NAF aircraft, to 33 in six years.

Also, during the period, the Nigerian military lost 11 aircraft to crashes.

In the interview, Gabkwet was asked if NAF would ground Beechcraft KingAir B350i since there had been two crashes involving it in recent times.

He said such an action would be hasty, adding that investigations into the fatal crashes were still going on.

Gabkwet, however, assured Nigerians that NAF would decide on fatal crashes after thorough the investigation it was jointly carrying out with the Accident Investigation Bureau.

“In the meantime, we are not rushing into taking certain decision that would hamper our own operations. Mind you, we still have operations ongoing. We must be careful about the kind of action we take. We should not take our eyes off the ball, we must remain focused in whatever we are doing, not take rash decisions just to please few critics on Twitter, Facebook or Instagram. No, we won’t do that.”

Gabkwet explained that the two Beechcraft aircraft that crashed were different series, noting that the one which crashed in Abuja in March was configured for intelligence, surveillance and reconnaissance while the Beechcraft involved in Friday’s crash in Kaduna was a passenger aircraft.

He said, “You have to understand; a lot of things go into the grounding of an entire fleet of aircraft. One thing that can make us ground them is based on the recommendation of the board (of inquiry). We have been using that (Beechcraft) aircraft for almost 10 years and we have had just two crashes of that aircraft, then we ground it; then, we are not been fair to ourselves. It has been the most reliable transport aircraft we had until this accident.

‘’So, going to ground it is too swift and the Accident Investigation Bureau and the Nigerian Air Force are working hand-in-hand to make sure they come out with something all Nigerians will see and that’s why we are involving the AIB in this investigation.”