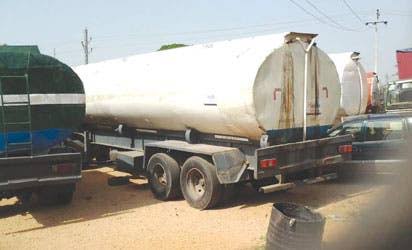 Personnel of the Lagos State Command of the Nigeria Security and Civil Defence Corps, on Saturday, busted a gang of suspected oil pipeline vandals in the Iyana-Odo area of the Alimosho Local Government Area of the state.

A statement signed by the Public Relations Officer of the command, Oluwaseun Abolurin, said the gang was busted through the command’s robust community-based intelligence network, adding that a 30,000-litre capacity tanker laden with petrol was found at the crime scene and impounded.

The statement read in part, “The vandals, who had loaded a 30,000-litre capacity truck with Premium Motor Spirit, popularly known as petrol, met their waterloo as the NSCDC operatives on patrol, who were hinted about their activities via the command’s robust community-based intelligence network, busted them at the scene of the crime.

“However, the actual quantity of the content had yet to be ascertained; the suspected vandals took to their heels, having sighted the gallant team of our Anti-Vandal Unit on patrol in the Iyana-Odo area and others from the state command.”

It was gathered that the Commandant, Lagos State Command, NSCDC, Ayeni Kolawole, and other officers undertook an on-the-spot assessment of the scene.

“The Commandant, Nigeria Security and Civil Defence Corps, Lagos State Command, Ayeni Paul Kolawole, having received the information, swung into action and led a team of officers around 9.35am on Saturday, including the Head of Intelligence, Head of Anti-Vandal Unit, Armed Squad personnel, the Public Relations Officer, OC Exhibit and some intelligence officers to the crime scene for an on the-spot-assessment of the scene and the unscrupulous activities of the vandals.

The truck was impounded in the midnight, but no suspect was apprehended, while the NSCDC operatives remained stationed from dusk to dawn without any fear of attack until the operation was successful. The truck has been brought to the state command headquarters on the commandant’s orders.”