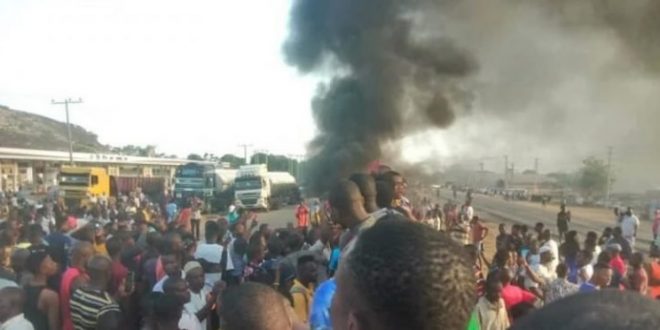 The spate of wanton kidnapping has occasioned emergence of protest group… and the group is festering like #endSARS.

Youths in Gauraka community of Niger State thought it out as solution.

On Monday, they troop out to protested against incessant attacks by bandits and kidnappers in the area.

Although officially, the police declared them as “some miscreants blocked both sides of the Abuja-Kaduna Expressway, protesting the recent cases of kidnapping in the community.”

The protest, which saw the irate youths blocking the Abuja-Kaduna Expressway, was reportedly caused by an early morning attack on the community during which no fewer than 15 persons were abducted.

Gunmen were said to have attacked the community twice in May before Monday’s attack.

The protesters made bonfires and blocked both human and vehicular movements on the expressway.

While trying to disperse the protesters, a policeman shot one of them.

The unidentified victim was said to have died at the hospital.

This, it was learnt, further angered the protesters, who razed the police station in the area.

Chairman of the Wazobia area in Gaurak , Emmauel Obanla, said, “The abduction that led to the protest happened in my area. They came around 1am, shot non-stop into the air and took away 15 persons.

“I would have been kidnapped too. This is our way of saying enough is enough.

“Last week, they demanded N40m for four persons. We are begging the government to come to our rescue. “

A protester, Muhammed Hahudu, said, “We have been sleeping with one eye closed in this area. We have been helpless in this community. If we are to count, about 30 people have been abducted so far in the community. They kidnapped a four-year-old girl.”