Find the latest bookmaker offers available across all uk gambling sites www.bets.zone Read the reviews and compare sites to quickly discover the perfect account for you.
Home » Whistle Blower » Crime » I stole plantains to raise N10k for my girlfriend‘s makeup — Suspect 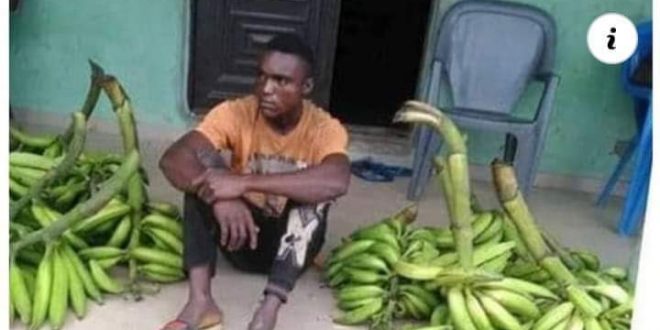 A young man who was arrested for stealing bunches of plantain in Ebedebiri, Sagbama LGA of Bayelsa has revealed the bizarre circumstances which motivated him to commit the crime.
In his statement, the man said he stole the plantain in order to raise N10,000 to purchase a makeup kit for his girlfriend.
According to reports shared by community leaders on Monday, May 24, the suspect was caught and during interrogation by a community leader, Peres Double, the suspect claimed that his girlfriend demanded for the sum of ten thousand naira (N10,000) supposedly to buy make-up and had given him a deadline to get the money.