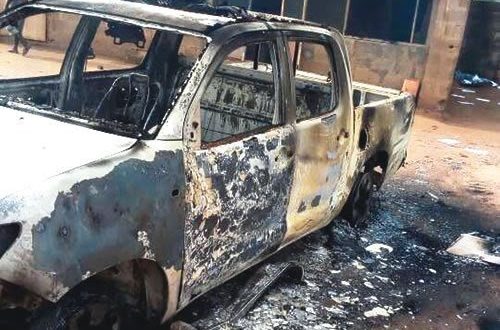 At least three vehicles were burnt and two patrol vans vandalised when Okada riders and policemen attached to the Elemoro Division Police Station in the Ibeju Lekki area of Lagos State clashed on Monday afternoon.

The incident occurred when police officers apprehended a motorcyclist who drove against traffic. The motorcyclist was said to have been shot dead in inexplicable circumstance.

In protest, other Okada riders stormed the Elemoro police station and burnt three vehicles and vandalised two patrol vans parked within the premises.

Police Public Relations Officer in the state, Muyiwa Adejebi, however, said the police station was not set ablaze.

Adejobi in a statement also said another police station in the Ile-Epo area of the state was also not set ablaze.