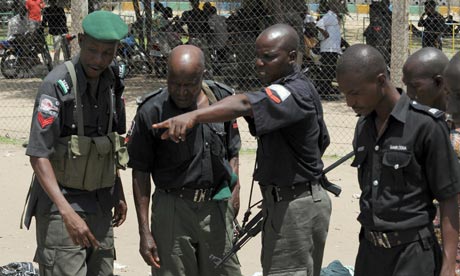 The Ebonyi State Police Command has said the man, who died in an explosion, on Tuesday in Afikpo, was not a suicide bomber as widely speculated.

The spokesperson for the command, Loveth Odah, said the victim of the blast was a policeman on duty in the area.

She said the policeman was a riot policeman on special deployment in the Afikpo North Local Government Area of the state.

Odah stated that the cop, Idi Aminu, died as a result of an accidental hand grenade explosion.

The incident, which occurred opposite the Amizi Amangbala Primary School and the popular Eke Market in Afikpo, threw the residents into panic as passers-by ran helter-skelter.

Residents had speculated that the deceased was a suicide bomber, but Odah said he was an inspector of police.

“He mistakenly hit the lead of his grenade, which was hanging on his waist, with his elbow, resulting in the deadly explosion,” she stated.

She noted that the police officer served in the MOPOL 32 and was not a suicide bomber as being circulated in the social media and other platforms.

police say it’s accidental discharge
Odah said his remains had been evacuated to a mortuary.

A source in the area said the incident happened around 10am.

“He made an attempt to enter the Amaizu/Amangballa Primary School, but he was turned back by the school security men because he couldn’t explain his reason for visiting. He immediately started running to a nearby bush before a big bang was heard,” the source stated.

The source said residents ran helter-skelter when the bomb exploded, but reconvened at the scene a few minutes later only to discover the man’s corpse in a pool of his own blood.

The state Commissioner for Internal Security and Border Peace, Chief Stanley Okoro-Emegha, confirmed the incident, but noted that he had yet to get the details.

There was no such incident as suicide bombers in Eboyin, the authority have said.

“My attention has been drawn to a news making the round in some section of the media that there was an explosion of a suicide bomb in Afikpo, Ebonyi State this afternoon.

The above news is in sharp contrast to the reality as the incident was a grenade of a security personnel carrying out his duties at the said location that accidentally exploded.

A similar incident equally occurred in front of the Ebonyi State Old Government House as some mobile police officers were servicing their APC machine. The first incident took the life of a passerby while the second caused injuries on the affected person, who has been taken to the hospital, where he is currently receiving treatment.

The general public is, therefore, charged to disregard the fake news as it is the handiwork of enemies of the state who are bent on causing panic where none exists.

Furthermore, Ebonyians and residents of Ebonyi State are reminded that generating and spreading of fake news aimed at causing panic in the state is actionable.

Francis Nwaze
Special Assistant to the Governor
(Media and Publicity)