Find the latest bookmaker offers available across all uk gambling sites www.bets.zone Read the reviews and compare sites to quickly discover the perfect account for you.
Home » Trending » News » 25 generals, others under new COAS, Yahaya may be shown exit door 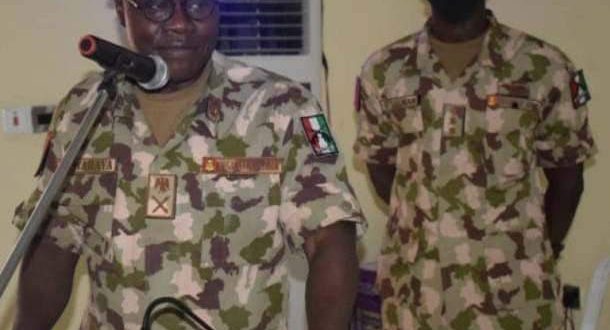 25 generals, others under new COAS, Yahaya may be shown exit door

The President, Muhammadu Buhari, on Thursday appointed Major General Farouk Yahaya as the new Chief of Army Staff, one week after the demise of the former COAS, Lt. Gen. Ibrahim Attahiru and 10 others in a plane crash in Kaduna.

Until his appointment, Yahaya was the Theatre Commander, Operation Hadin Kai, responsible for counter-terrorism and counter-insurgency operations in the North-East.

Yahaya’s appointment was contained in a statement by the Acting Director, Defence Information, Brigadier-General Onyema Nwachukwu.

The statement reads, “The Commander in Chief of the Armed Forces of the Federal Republic of Nigeria, President Muhammadu Buhari has appointed Major General Farouk Yahaya as the new Chief of Army Staff.

“Prior to his appointment Major General Yahaya was the General Officer Commanding 1 Division of the Nigerian Army and the incumbent Theatre Commander of the Counter Terrorism Counter Insurgency military outfit in the North East code named Operation Hadin Kai.”

On Thursday, there were strong indications that his appointment would lead to the retirement of no fewer than 25 major generals, who were his seniors.

According to military tradition, the new COAS, who is of Course 37 is junior to these officers and cannot superintend over them.

Yahaya is also junior to the other service chiefs as the Chief of Defence Staff, General Lucky Irabor is of Regular Course 34 Intake; Chief of Naval Staff, Vice Admiral Awwal Gambo and Chief of the Air Staff, Air Marshal Oladayo Amao, both being Regular Course 35 intakes.

Yahaya was the General Officer Commanding 1 Division of the Nigerian Army, Kaduna before his deployment to Operation Hadin Kai.

It was gathered that the appointment of Yahaya, who is from Sokoto State, was a bit delayed because the President was trying to weigh the ethnic and religion factors in naming a new COAS.

A source said, “The President finally settled for Yahaya because many of the Generals in Regular Courses 35 and 36 were found to be from the same tribe or same state as other security chiefs in the Ministry of Defence, National Security Adviser’s office, the Navy and the Air Force.

Another contender to the top military position, the Chief of Policy and Plan Maj. Gen. Benjamin Ahanotu of Regular Course 35, who is from Anambra state which shares boundary with Delta state where the CDS hailed from.

The COAS was born on January 5, 1966 in Sifawa, Bodinga Local Government Area of Sokoto State.

He started his cadet training at the NDA on September 27, 1985 and was commissioned into the Nigerian Army Infantry Corps on September 22, 1990.

Tags 25 generals others under new COAS