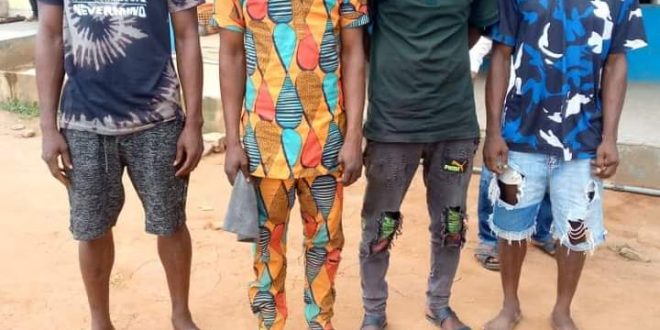 An Assistant Superintendent of Police (ASP) and an Inspector were seriously Injured by suspected land grabbers, who held Baba-Ode/Onibuku community in Ado-Odo/Otta Local Government Area of Ogun State spelldown on Wednesday, May 25, 2021.

The injured policemen, ASP Tajudeen Adeleke (aka Otunba) and Inspector Babatunde Olayiwola, were part of the team that was mobilized by the DPO, CSP Bamidele Job, to the troubled community, in response to a distress received on the bloody mayhem.

The operatives, Crime Puzzle gathered, were on a mission to ensure the safety of the lives and properties of residents of the hostage-held neighbourhood, only to be confronted in a vicious attack by the hoodlums, who descended heavily on the policemen, in the event of which the two policemen were macheted.

The detectives tactically overpowered the rampaging hoodlums and arrested two of them, Najimu Ojumola, 42 and Monday Olaleye, 25.

A dramatic twist was introduced into the scenario as, according to the state Police Public Relations Officer (PPRO), DSP Abimbola Oyeyemi, the social miscreants made desperate moves to forcefully secure the release of their members from Police grip.

“While the policemen were taking the arrested hoodlums to the station, their colleagues ambushed the operatives on Idiroko Road and launched another attack, with the intent to freeing the arrested ones”, the PPRO said.

They, however, got more than they bargained for, as the police team repelled them and arrested two more of the hoodlums, Felix John, 27 and Kehinde Martins, 34, bringing the number of suspects arrested, in connection with the mayhem, to four.

Recovered from the suspects were eight expended cartridges, one live cartridge, one cutlass, three Bajaj motorcycles and one Toyota Corolla, marked FST 42 FT.

The state Commissioner of Police, Edward Awolowo Ajogun, has consequently ordered the transfer of the suspects to the state Criminal Investigation and Intelligence Department (SCIID) for discreet investigation.

“The CP also warned land grabbers to steer clear of Ogun State, as the command will not tolerate any form of thuggery and hooliganism in any part of the state”, the statement added.