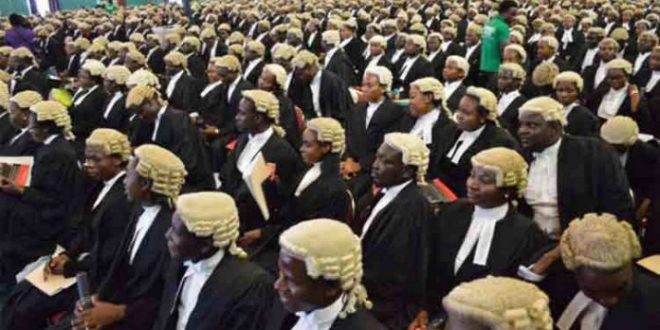 The last eight weeks have not been the best of times for lawyers who make their living by going to courts in Nigeria, following the prolonged strike by the Judicial Staff Union of Nigeria (JUSUN). Daily Trust Saturday findings show that most of them have turned to other jobs for survival.

The strike, declared by the union on April 6, over the non-implementation of autonomy for the judiciary in the states have seen all the courts nationwide shut; as a result, activities around litigations went into a lull.

The total lockdown in the third of arm of government affected the Supreme Court, the various divisions of the Court of Appeal, the National Industrial Court, the Federal High Court nationwide, state High Courts, Sharia Courts, Customary Courts, down to the Magistrate’s Courts, Area Courts and tribunals.

The impact of the strike is being felt by lawyers. Those who have some savings are resting or working on some outstanding files while others have embarked on alternative means of livelihood, according to findings by Daily Trust Saturday.

Top on the list of occupations by lawyers at this time is taxi driving, farming and some businesses, especially in Lagos, Abuja, Enugu, Ilorin and Kaduna.

An Abuja-based lawyer, Kene Ifekwe, said he had been involved in managing real estate and rental services for clients, which has kept him going.

Some lawyers who spoke on condition of anonymity told our correspondent that the near two months of JUSUN strike had dealt a huge blow on their finances.

They noted that the strike action had compounded their woes, especially as they were trying to recover from the economic effects of COVID-19.

“We have to survive. Our colleagues are into many things – farming, petty businesses, fashion designing, among others. I am planning to go into farming too,’’ a male lawyer told our correspondent.

A member of the Kwara State chapter of the Young Lawyers Forum (YLF) who craved anonymity, said many young lawyers had devised other means of surviving the strike.

“What most lawyers do now is the business of agents and caretakers and selling properties. Many of our females are now involved in trading on foodstuff, provisions, dresses, materials, while others have become fashion designers and farmers. A colleague of ours is now a disc jockey (DJ). We even have cases of those involving on unethical practices this time around, living on clients’ money, especially those managing properties, even though it has not gotten to the open,” he said.

According to him, those in private practice are the worst hit, unlike their counterparts in the public sector, who still continue to draw their salaries from the government monthly.

“The few notary publics among us who are signing documents have reduced their fees to notarise documents from N2,000. There is a senior lawyer in town who collects N100 per document, just to attract patronage. It is that bad,” he added.

An Enugu-based lawyer, Victor Amilo, said some of his junior colleagues started driving Uber and Bolt cars for income while some had gone into trading and providing legal services to politicians.

A Kaduna-born legal practitioner, Ali Zubairu, said 70 to 80 per cent of lawyers involved in litigation had borne the brunt of the strike as many clients were turned back because the courts are not sitting.

Reacting to the development, Yomi Omowunmi said he would lay off his junior lawyers if the strike is not called off at the end of the month because of the cost of maintaining them.

Joseph Otteh, the convener of Access to Justice (AJ), has pleaded with the striking judiciary workers in the country to call off the strike, saying they should consider the plight of detainees who have been denied justice since the commencement of the industrial action.

Also lamenting the situation, Rasheed Lawal said most of the legal documents that had been prepared were piled up in their offices, yet to be signed. He added that what had kept some lawyers going were their legal advisories and retainership agreement fees with some companies/clients.

“As Nigeria and the world continue to battle the scourge of the COVID-19 pandemic, it is worrisome that detention centres are holding more detainees than they are designed to hold, making them fertile grounds for the transmission of the virus.

“My disappointment and disgust for the leaders we have today is increasing everyday. The political class deserves no applause, the APC deserves no praises, and some leaders of the Nigerian Bar Association (NBA) should just bury their heads in shame,’’ he said.

A Senior Advocate of Nigeria (SAN), Adegboyega Awomolo, said he felt pity for junior lawyers who have no other means of survival other than appearance fees from clients and allowances. He encouraged them to think outside the box without compromising the integrity of the legal profession.

“I can tell you that when I was a junior lawyer in Ilorin, I ran a farm where I planted yams and kept poultry. I also engaged in transport business: I had two taxis in Ilorin. But the Nigerian economy is so bad now that no investment is encouraged. You cannot take money from the bank and expect good interest, you can’t do any business that will bring you profit. We are going through the worst era as a country.

“If you want to go into farming and herders come and destroy the farm, what would you do? I am happy that a lot of lawyers have businesses. We used to have a Central Bank of Nigeria investment for lawyers. In that investment, if you had N1million or N2million in your savings account you would get N5,000 as interest at the end of the month,’’ he said.

He said the legal profession had become so challenged in the country that lawyers now find it difficult to survive, while the police are taking advantage of the absence of courts.

Also speaking, a former president of the Nigerian Bar Association (NBA), Abubakar Balarabe Mahmoud (SAN) said the association should be in the forefront of issues affecting the welfare of lawyers in the country.

“They have to come up with a realistic plan on how to mitigate this. The best realistic way is to mobilise the senior members of the Bar who have the capability to assist the younger ones. I think that is the immediate solution to this problem. Other solutions have to be more medium and longer-term solutions,” he said.

He described as unfortunate and unacceptable, the shutting of courts for almost two months, explaining that the impact is not just on lawyers but the wider society.

Also speaking in the same vein, an Abeokuta-based lawyer, Habeeb Whyte, said the strike was a clarion call for lawyers to diversify their sources of income.

According to him, the strike is biting hard on lawyers as some of them only make money on litigations, charging per hour or appearance.

“The effect of the strike is quite enormous economically because everybody is just at home.

“The best we can do for ourselves is to keep on improving on the knowledge of the law by reading, having more time for the library and checking on all our cases. Doing that is good, but you can’t be doing that on empty stomach. You have to survive anyway you can.

“Most lawyers that didn’t go to police stations now go there to settle cases without resorting to court. They do that because they can’t steal,’’ he said.