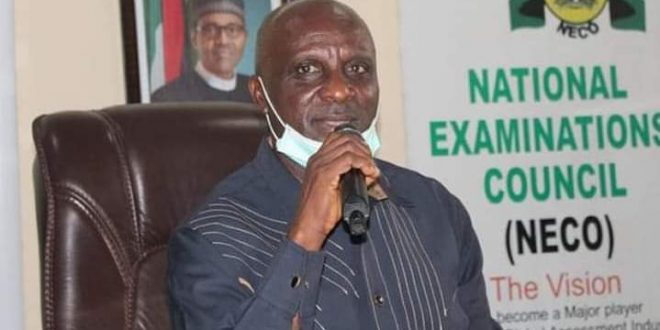 Controversies have continued to trail the death of the Registrar of the National Examinations Council, NECO Professor Godswill Obioma. While some sources quoted the wife as claiming that he was strangled to death .
The reports claimed he was killed on Monday May 31 at his residence in Minna ,Niger State the headquarters of the Council.
According to the information pieced together from his wife, Elizabeth, the assasins who had been waiting for their target, pounced on him as soon as he drove into his residence. After the dastardly act, the men fled without taken any item.
However Obioma’s first son in a statement in a
to Mustapha K. Abdul, the Director Human Resource Management, NECO, revealed that his father passed on from a health ailment.
“Dear Sir, this is to formally inform you that my father Prof. Godswill Obioma, the Registrar/Chief Executive of NECO passed to eternal glory yesterday 31/5/2021 after a brief illness.
We request that you kindly notify the Board, Management and the entire staff of the Council of this development. We shall keep you duly informed.”