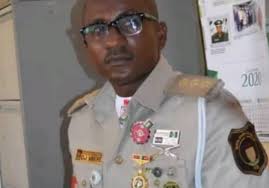 Provost of the Imo State Command of the Nigerian Immigration Service, Okiemute Mrere has been murdered

It happened on Saturday night along the Owerri-Port Harcourt Expressway.

Mrere’s corpse was, however, discovered in the bush on Sunday.

Mrere was riding in a Hilux van belonging to NIS when he was allegedly ambushed and shot to death.

His service pistol was found on him when his corpse was discovered the next day.

His official Hilux van was riddled with bullets.

Investigation is said to be ongoing.