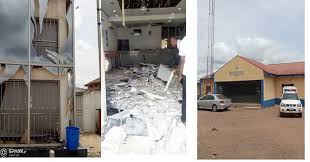 The dare-devil armed robbers were very strategic and with the way they operated, they had enough intelligence.”

ASP Osho Oluranti, Inspector Lekan Olalere, two special constabularies, namely: Oladeni Olalekan and Oyedeji Muyideen, were shot dead in the process…others are civilians, namely: Toheeb Oyebola, Temilorun Adebiyi and one other, whose identity is not yet known.

The remains of the deceased persons had been deposited in the Oluyoro Catholic Hospital Morgue, Apomu

The robbers, numbering about 35, came in about five vehicles and simultaneously attacked the areas with explosive devices and guns.

the hoodlums fled with gunshot wounds and abandoned two of their operational vehicles.

The attack on the police station was to ease their robbery of the two banks.

The armed robbers who attacked branches of First Bank and Access Bank in Apomu and Ikire areas of Osun State on Wednesday targeted a bullion van bringing cash to the banks.

It was, however, gathered that the robbers missed their target, as they had already been repelled before the bullion van bringing money arrived in the town.

the robbers entered through Ikoyi town and demobilised the Armoured Personnel Carrier stationed at the entrance of the town and shot dead a police officer.

Having split into three groups, the gang, it was learnt, moved on motorcycles carrying three men each, who moved to Ikire and Apomu, where they launched coordinated attacks on a branch of Access Bank in Apomu, a branch of First Bank and the police divisional headquarters both in Ikire, where a police inspector and two community policing officers were killed.

At Apomu, the robbers were, however, prevented from gaining entrance into the bank, as members of the Oodua People’s Congress,local hunters, Agbekoya and vigilante groups mounted resistance.

In the shootout that ensued, three civilians were reportedly shot dead, while a member of the OPC, Kazeem Adeleke, was injured.