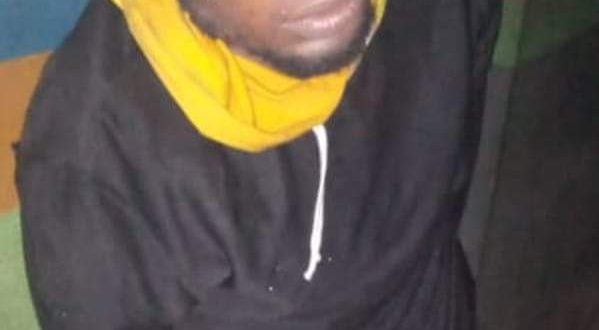 A young man, who allegedly burgled his former place of work and, to escape police arrest, hid himself in a water tank, has been sniffed out.

The suspect, 28-year-old Ola Adeoye, who was disengaged a month ago by his employers, Owoyemi Super Store on Idiroko Road, Sango-Otta in Ogun State, made a clandestine and criminal visit to his former office in the early hours of today, June 3, 2021.

He allegedly broke into the two-storey building through the balcony on the first floor, from where he gained access into the the Managing Director’s (MD) office and ransacked everywhere.

In a press release issued by the Ogun State Police Public Relations Officer (PPRO), DSP Abimbola Oyeyemi, the suspect was with the intent of breaking the company’s safe within the MD’s office when the bubble burst and the Police were alerted.

Realizing that he could not immediately rush out of the premises without being caught, he took to the option of securing himself in a water tank.

Acting on the distress call, the PPRO said, the DPO, CSP Godwin Idehai, mobilized his men and moved to the scene, for an on-the-spot assessment and arrest of the burglar.

“After a diligent search of the premises, the one-man burgglary squad was seen hiding in a water tank, from where he was promptly arrested”, Oyeyemi said.

However, Adeoye, in his confessional statement to the Police owned up to having truly served in the company, where he was booted out a month ago.

To this end, the state Commissioner of Police, Edward Awolowo Ajogun, has directed that an in-depth investigation into the suspect’s anticident be conducted and thereafter, charged to court.