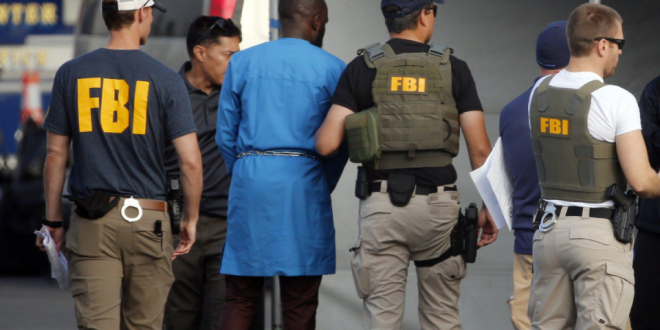 The Federal Bureau of Investigation (FBI) has arrested Charles Onus, a Nigerian, for his alleged involvement in diverting $800,000 payroll funds into prepaid debit cards controlled by him.

Onus, arrested on April 14, in San Francisco and detained, was on Wednesday presented before a Manhattan federal high court.

According to allegations in the indictment filed in the Manhattan court, Onus allegedly participated in a scheme that stole nearly $1 million by hacking into a payroll processing company’s system to access user accounts and divert payroll to prepaid debit cards he controlled.

He was accused of hacking over 5,500 company user accounts between July 2017 and 2018 through a cyber-intrusion technique referred to as “credential stuffing”.

“As alleged, Onus did this as effectively as someone who commits bank burglary, but with no need for a blowtorch or bolt-cutters. Thanks to the FBI and IRS-CI, Onus is in custody and facing serious federal charges,” the statement by the justice department said.

“From at least in or about July 2017 through at least in or about 2018, ONUS participated in a scheme to conduct cyber intrusions of multiple user accounts maintained by a company that provides human resources and payroll services to employers across the United States (the “Company”), in order to steal payroll deposits processed by the Company.

Onus joins the growing number of Nigerians being prosecuted for identity theft fraud in the US.

Three weeks ago, an aide to Dapo Abiodun, Ogun state governor, Abidemi Rufai, was arrested in the US over alleged $350,000 fraud.

Previous I suddenly remembered why I fell in love with the president – Femi Adesina
Next Majority of Nestle’s food portfolio is unhealthy, report says