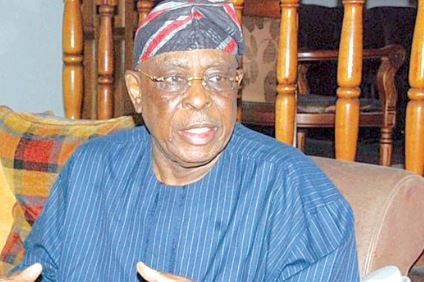 Former Governor of Ogun State, Chief Olusegun Osoba took on the leader of the Yoruba socio-cultural group, Afenifere, Chief Pa Ayo Adebanjo on his political inconsistent since the days of Chief Obafemi Awolowo.

Osoba said it was Pa Adebanjo who broke Afenifere and not Asiwaju Bola Ahmed Tinubu nor himself.
“Chief.Segun Osoba expose Pa.Ayo Adebanjo.says Adebanjo and a few others broke Afenifere, but not Tinubu and myself.
He has always been antagonistic to anybody who rose to governance within the progressives’ family. He was antagonistic to the UPN governors when they reached out to the PRP governors in the Second Republic. He led the crusade against the governors and told Awolowo that the UPN governors had sold out. When Papa (Awolowo) got exasperated he called a meeting of the UPN leaders at Eko Hotel.I recall Chief Onabanjo speaking on behalf of the governors and telling Chief Awolowo that “all the people shouting are not more loyal to you than we are, that if the party must win at the federal level, the party must relate with others outside Western Region”.

“At the end, Chief Awolowo said the governors should continue with their association but they should report regularly to the National Executive Committee of the party.They, then expanded their association to 12 governors which were the group that led Awolowo into signing an agreement with Dr Azikiwe in Benin ahead of the 1983 presidential election which Awolowo actually won. Their reaching out was very helpful. It was that same progressive association that helped us when we moved to the Third Republic SDP that produced the late Chief MKO Abiola as presidential candidate. My argument is that Adebanjo has never been comfortable with any governor either in UPN or in AD. That is what is manifesting now in his attack on Asiwaju Tinubu, Chief Akande and Niyi Adebayo who walked out on them in 2003. He bragged that he made us governors. Who among us did not have political experience before we became governors in 1999? Lam Adesina as Oyo governor was, as far back as 1979, a House of Reps member in the National Assembly dominated by the late Chief Abraham Adesanya and co.

The late Chief Adefarati as Ondo governor was a Commissioner under Ajasin. Akande in Osun was deputy to the late Chief Bola Ige as old Oyo governor. So he is making a cheap statement by saying we are not consistent.
“The point is that Adebanjo has never contested any election. I challenge him to test his popularity. He should pick anywhere in Ogun, let the two of us walk around.

There is no village in Ogun State that I will not call out three or four families.For example, in his dictatorial way, he says he has now zoned the presidency to the Igbo. Who is he to zone the Yoruba race out of the 2023 presidential race?
“Where did we meet as Yoruba? Awolowo will not behave like that. There will be a meeting where there will be consensus. Of course the Igbo have the right to contest in 2023 just as I as a Yoruba man also have the right to contest.Only Ayo Adebanjo understands his interpretation of consistency. Here is a man who, when we were rigged out, was the first to jump on the PDP vehicle of Gbenga Daniel in Ogun State.And till tomorrow, he is the godfather of Gbenga Daniel. He moved from Gbenga Daniel to Olusegun Mimiko in Ondo under the Labour Party. And he went to pronounce Mimiko as the greatest of those executing Awolowo’s philosophy, that Mimiko’s free education was the best.

“He moved from there to PDP in Osun to praise Olagunsoye Oyinlola and today he is with PDP’s Seyi Makinde in Oyo. That is his interpretation of consistency. He said we sold out to Fulani. When he campaigned for former VP Atiku for presidency, he forgot that Atiku is a Fulani man too. When they hobnobbed with former President Jonathan, that is consistency. Awolowo will never jump from one party to another. And Awolowo, if alive, would never hobnob with PDP”.

Previous How University of Ilorin student was raped, murdered at her sister’s house
Next Bandits kill 88 in Kebbi