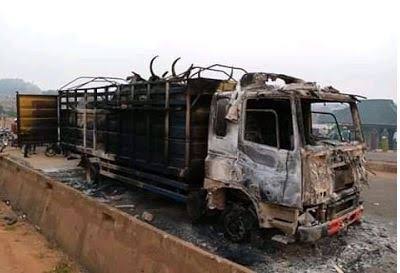 On Friday, a lorry carrying cows at the Kwata flyover junction, along the Enugu – Onitsha Expressway, was set ablaze, killing all the cows over the death of about eight children hawking wares.

The incident attracted irate youths, who burnt the truck and the cattle, having resisted attempts to free the cattle before setting the truck ablaze.

The chaos caused by the action of the irate youths led to massive shooting in the area by military personnel to disperse them, leading residents in the area and motorists to flee out of fear.