Find the latest bookmaker offers available across all uk gambling sites www.bets.zone Read the reviews and compare sites to quickly discover the perfect account for you.
Home » Entertainment » Celebrity » Opinion : What Is The Origin of The ‘Christian’ Cross? 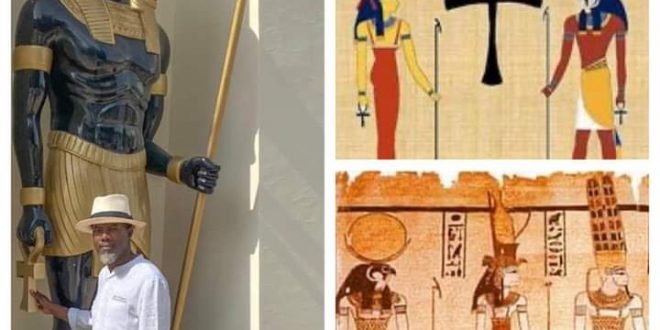 Opinion : What Is The Origin of The ‘Christian’ Cross?

Every day, Christians in their hundreds of millions make the sign of the Cross and think they are performing an act of faith pleasing to God. But is that really what we are doing?

I had heard and read about the true origins of the Cross, and in 2019, I travelled to Ethiopia to celebrate Meskel, which is a celebration of the discovery of the true Cross in Ethiopian orthodox Christianity.

I engaged the services of a licensed ancient Egyptian historian and we began investigating. And that was when I discovered the Ankh.

So, how does the Ankh concern Christ and the Cross?

The Ankh is an ancient Egyptian mystical symbol used to represent life. It is most commonly seen being held by Ancient Egyptian gods and was given by them to Pharaohs as an assurance that they (the gods) would sustain the Pharaoh’s life in the afterlife.

The Ankh can be found in the temples and tombs of virtually every ancient Egyptian Pharaoh, and I saw them with my own eyes at Tutankhamun’s tomb. Do note that Tutankhamun lived 1300 years before Christ came to Earth.

One of the things that will shock many people is the fact that Christ did not die on a Cross. Scripture never said so. I can see you getting agitated. Christ existed. He is the Son of God. He lived, died and resurrected as a propitiation for our sins, and there is no way to God EXCEPT through Christ.

I did NOT say The Bible never said Christ died on The Cross. It does. I said SCRIPTURE never said so. The Bible is a TRANSLATION of the Holy Scriptures.

The ONLY Old Testament Scripture that prophesied the way Christ would die (Deuteronomy 21:23), uses the Hebrew word הָעֵ֗ץ (spelt in Roman alphabets as hā-‘êṣ) which is the Hebrew word for tree.

Believe it or not, for the first 200 years of the Church, the Cross was NOT a Christian symbol. The Christian symbol was actually a fish, in reference to Christ’s words in Matthew 4:19 “Follow Me, and I will make you fishers of men.”

Please do not take my word for it. Research it.

Everywhere you see the word ‘Cross’ in The New Testament, you are reading a word that is translated from either staurō or xylou. I encourage you to use a Greek dictionary to find out the meaning of both words. In fact, in the KJV, the translators sometimes forgot to use the ‘official’ word, Cross, and instead used the proper word, tree in Acts 5:30, Acts 10:39, Acts 13:29, Galatians 3:13, and 1 Peter 2:24.

So, where did the Cross originate from? I urge you to look at the attached picture of the Theban Trinity of ancient Egyptian demon gods (consisting of Amun, his consort Mut and their son Khonsu).

What are they each holding in their right hands? I urge you to note that these papyrus paintings are over 3000 years old. In Exodus 20:4, Scripture says we must not make an image of anything on Earth or in heaven or under the Earth.

That is why Christ and His disciples and the early Church did not use a Cross, whether with or without the image of Christ on it. The usage of the Cross and the Crucifix came from the Roman Emperor, Constantine, who was a pagan and claimed to have converted to Christianity. He claimed to have a vision in which he saw a Cross. And thus, began the introduction of The Cross into Christianity. Both of which, the Romans and Greeks copied from the ancient Egyptians, not from Scripture.

It is time for us to purge Christianity of pagan practices and that is why after prayer and fasting, I felt led to travel to Israel, Greece, Spain (Montserrat to see the Black Madonna), Rome, The Vatican, Ethiopia, and Egypt, to gather first-hand knowledge about the true faith that Christ brought to Earth.

We must be like the Berean believers, of whom Scripture said “These were more noble than those in Thessalonica, in that they received the word with all readiness of mind, and SEARCHED the SCRIPTURES daily, whether those things were so.”-Acts 17:11.

Notice that they searched the Scriptures. They did not just swallow everything Paul told them hook, line and sinker.

So, while I know that what I am writing will not be popular, I must say it, because Scripture says “we are therefore Christ’s ambassadors, as though God were making His appeal through us. We implore you on Christ’s behalf: Be reconciled to God.”-2 Corinthians 5:20.

To me, this is the only way I know how to worship God in spirit and in truth and I urge all my readers not to take my words at face value, but to be like the Berean Christians and “search the scriptures daily, whether those things were so.”

We must pay close attention to what Scripture says. Scripture like 1 Timothy 4:1 which reads as follows:

“Now the Spirit speaketh expressly, that in the latter times some shall depart from the faith, giving heed to seducing spirits, and doctrines of devils;”

How can we have a symbol in churches whose origin is clearly of Ancient Egyptian mystical origins, and we are not asking questions? Some people privately message me and urge me to tread with caution, lest the establishment quietly kills me. But even that warning assumes that I am afraid of death. I am not scared of death. Not at all. What do I want to achieve in life that God has not given me, often on a platter of gold? If I, who has been so blessed by God, cannot risk my life against the establishment for Him, then I am of all men most useless!

2 Chronicles 16:9 says “For the eyes of the LORD run to and fro throughout the whole earth, to shew himself strong in the behalf of them whose heart is perfect toward him.”

My body is imperfect towards God. I am a sinner. I freely confess that. But my heart is wholly devoted to God. I have no doubt in my heart that the God of Abraham, Isaac and Jacob, the God and Father of my Lord and Saviour, Yeshua Hamashiach, is the ONLY TRUE God.

If I am killed doing what I believe He is leading me to do, then that death will be the sweetest death possible and I have no fear in my heart if it has to come.

We cannot just go along to get along. We must interrogate every aspect of our religion to make sure that it has complete fidelity to Scripture. After all, it is the same Scripture that warns us to “believe not every spirit, but try the spirits whether they are of God: because many false prophets are gone out into the world.”-1 John 4:1.

Every information that does not lead to transformation is entertainment. Do not just read this and be entertained. Read this and be spurred on to get to the bottom of your faith. You owe it to yourself because on the last day of Judgment, every man will independently give an account of his life before God who tries the heart.

2 Timothy 3:16 says “All SCRIPTURE is given by inspiration of God, and is profitable for doctrine, for reproof, for correction, for instruction in righteousness:”

Note the word Scripture. Not Bible (translation of Scripture).

That Masons, and Rosicrucians dominated the translation of Scripture into the King James Version of The Bible is a historic fact. Research it. Sir Francis Bacon, who was Lord High Councillor to King James I, was a Rosicrucian. That is a historical fact. The word Rosicrucian simply means “Order of the Rosy Cross”. He picked many of the KJV translators.

It was their agenda to promote the Cross. The Cross plays a mystical role in their occult world. Many of those appointed into the committee that translated Scripture into KJV were Masons. That is a historical fact. And even Masons themselves regard the KJV as “The Great Light of Masonry”.

What is the evilest regime that ever existed on Earth. That would be NAZI Germany. What was their state symbol? You would say a Swastika. And you would be wrong. That is a Hindu word that those outside NAZI Germany used to describe their symbol. The NAZIs called their symbol a Hakenkreuz, which is German for Hooked Cross. It is a known fact that the NAZIs were deeply steeped in the occult.

Scripture tells us not to be “be conformed to this world, but be transformed by the renewing of your mind, that you may prove what is that good and acceptable and perfect will of God.”-Romans 12:2.

What better way to fulfil the above Scripture than to read Scripture in its original language and “conform” to it? If the original Scripture does not mention the word ‘Cross’, and instead uses the word tree, then who are we conforming with by arguing for and propagating the lie that Christ was killed on a Cross? Certainly not God. Certainly not Scripture.

Why can we as Christians not learn from Muslims by learning and reading Scripture in the original language? I know of 7-year-old Muslims who can read and recite the Quran in Arabic. Why can we not have adult Christians who can read and recite the Holy Scripture in Hebrew, Aramaic and Greek? That is why I respect Apostle Johnson Suleman. He not only taught himself Greek. He went to Greece and stayed in a commune and read the original Scripture in its original language 34 good times!

Tags Opinion : What Is The Origin of The ‘Christian’ Cross? slideshow. news