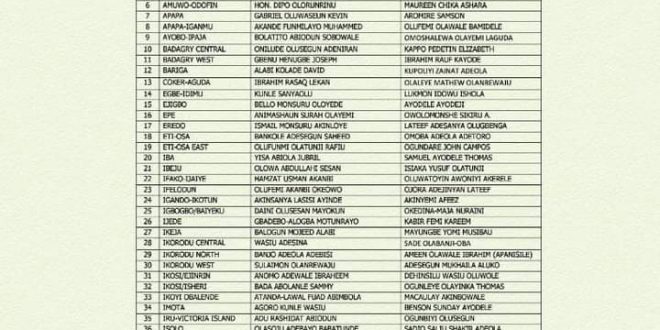 The Lagos State chapter of the All Progressives Congress (APC) may have released names of the party’s candidates for the Chairmanship and Vice Chairmanship positions in the coming local government elections in the state.

The lists revealed some surprises as at least two first time council Chairmen failed to make the list.
This was contrary to earlier directive that Chairmen serving for first term should be given the opportunity of going for another term.
The casualties in this case are: Valentine Buraimoh of Amuwo Odofin Local Government and his counterpart in Apapa, Owolabi Adele.
Some prominent aspirants return as vice chairmanship candidates among whom are Ajoke Moromoke Obe (AMA) in Agbadookeodo Local Council Development Area and Ibrahim Akintunde Johnson in Alimoso Local Government.
The full list.