Find the latest bookmaker offers available across all uk gambling sites www.bets.zone Read the reviews and compare sites to quickly discover the perfect account for you.
Home » Trending » News » T. B Joshua dies of Cardiac arrest..ahead of June 12 birthday 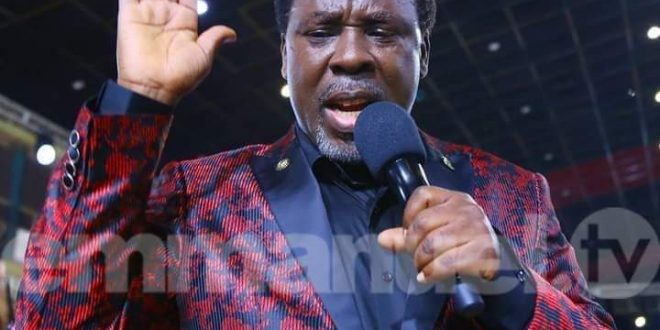 T. B Joshua dies of Cardiac arrest..ahead of June 12 birthday

Prophet Temitope Balogun Joshua ..who was named Fatai, at birth. He was a Muslim, from Arigidi Akoko ,Ondo State.

T.B. Joshua who is very controversial for his several miracles in the last three decade while alive was planning to celebrate his 56th birthday in a grand style come Saturday June 12, 2021 when he allegedly suffered cardiac arrest yesterday evening after a church service inside his spiritual mangrove in Ikotun.

Since the end of COVID 19 restrictions late last year, TB Joshua has refused to open his multi-billon dollars cathedral in Ikotun to worship as he allegedly directed worshippers into his mangrove, a sacred place of Worship lined with trees, a deep river and other natural effects.

Videos were seen of him hitting some people’s head in the name of deliverance and other spiritual activities.

TB Joshua’s worst moments came on Friday September 12, 2014 when a guest house he was constructing inside his Ikotun SCOAN (Synagogue Church of All Nations) crashed and killed over 160 people including South Africans, Ivorians and Nigerians who came for spiritual activities.

It was a most unfortunate season for miracle seekers in his church.

Till date, the church claimed the accident was caused by the effect of a moving helicopter while majority refused to believe the narrative, and a strategic minority feels the killing of the people in such a mysterious manner was for a diabolical ritual.

There are several allegations against the late spiritualist which are in the public domain.

Recently, his YouTube channel with over One Million Eight Hundred Thousand subscribers was yanked off by Youtube over an alleged “Gay Miracle” on a woman who claimed to have been healed of possesissive spirit of lesbianism.

An LGBTQ group in UK frowned at TB Joshua’s conduct and petitioned YouTube which warranted the yanking of his famous “Emmanuel TV” Channel on YouTube.

He was also allegedly banned on Twitter until he ran to open a new Tik-Tok account before his mysterious death yesterday after a revival.