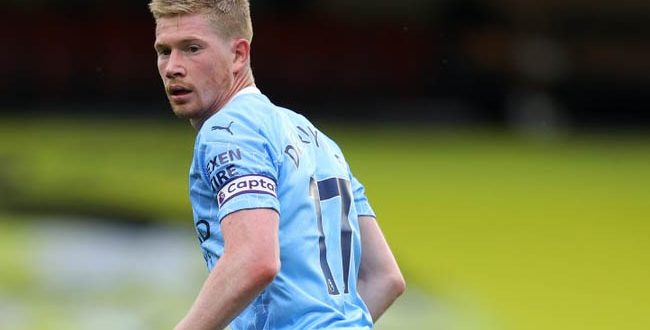 The Belgium midfielder follows in the footsteps of Thierry Henry and Cristiano Ronaldo as the only other players to win the award in back-to-back years.

The 29-year-old also guided City to the club’s first ever Champions League final, where his presence was badly missed during the latter stages of a 1-0 defeat to Chelsea last weekend as he was forced off early in the second-half with two fractures to his face.

“You want to win all the trophies with the team and then obviously if you win a trophy like this, this is probably the most important one as an individual trophy in the league,” said De Bruyne.

“To be voted by your competitors who you compete with every game, that says a lot. They are the people, in my view, who know the most about the game and they are trying to get to the best level.

“When you have these things, you can show your kids and say, ‘Look, this is what daddy did when he was younger’.”

De Bruyne scored 10 goals and provided 18 assists in 40 appearances across all competitions for City this season.

Dias was crowned the Football Writers’ Association player of the year last month.

Foden capped a superb campaign by being named PFA men’s young player of the year.

Previous 20-Yr-Old Nigerian Footballer Drowns
Next Fear of demolition as Lagos focuses on Suberu-Oje, 8 other villages