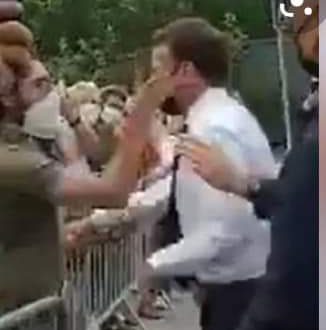 A man in the Afternoon of Tuesday ,June 8 slapped French President Emmanuel Macron in the face during his official visit to the south-east of France.
As Macron approached to greet a group of people who stood in a controlled environment to welcome him, a man reached out and slapped the bemused president.
Security agents scrambled to rescue the President while the man and an accomplice were arrested .
The man reportedly shouted “Down with Macron-ism” as he slapped the president.
The ruffled president briefly returned to greet other bystanders after the incident.