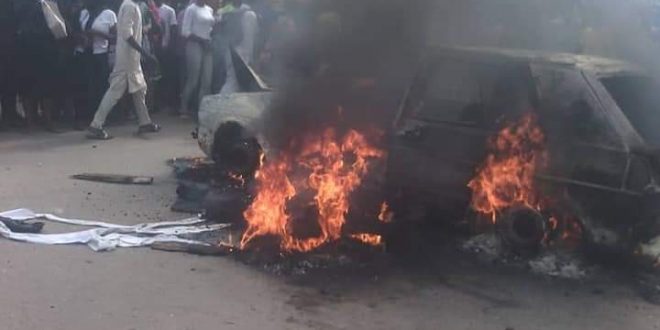 Two out of three Suspected Kidnappers were rescued by the Police, while one was set ablaze with their Vehicle.

YOu NEWS has it on good authority that a commercial Motor Cycle Operator Popularly known as “Okada” said was to have engaged the Suspected Kidnappers in a hot Chase from Ajegunle Toll-Gate Lagos-Ogun boundary spot after some of the school children kidnapped cried out for help through the window of the kidnapers Vehicle.

The pursuit was hot, but it was at at Mulero Bus Stop in Orile-Agege Lcda where their Vehicle was stopped by some Passersby after the Commercial Motorcycle operator raised alarm to alert Passersby of the action of the suspected Kidnappers.

We also gathered that one of the Kidnappers was lynched to death Instantly and also set ablazed right on the Spot together with their Vehicle.

It took the quick intervention of the Nigeria Police Force to rescue the other two members of the Suspected Kidnappers and the School children kidnapped.

We could not confirm if one of the abducted School children died in the vehicle, because we were told that the suspected Kidnappers had already killed one of the Children before they were apprehended.