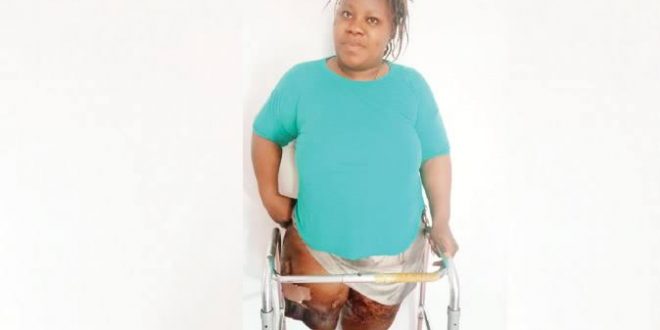 The chances of her walking on her two legs again were quite very high, after an accident.

But she said the chances were blown away with negligence of her doctors at LASUTH.

The 35-year-old woman, Oluwadamilare Aremu, was admitted to LASUTH in December 2018 when an 18-passenger vehicle she boarded was involved in a crash on the Third Mainland Bridge, leading to her suffering a broken thighbone.

She alleged that doctors at LASUTH assured her that she would walk again, but her hope was dashed after two surgeries with the doctors still demanding funds for a third and final surgery, which they claimed would solve the problem.

She was discharged on July 8, 2019, to go and find the money for the third surgery, adding that she was already broke as a result of the bills she had to pay while on admission.

Aremu stated, “I was involved in an accident and rushed to LASUTH on December 16, 2018. LASUTH doctors told me that I would walk again. But after two surgeries in 2019, I was told that I needed a third and last one.

They sent me home to find money, but I was broke because I had spent over N4m while on admission.

“They assured me that after the third surgery, I would be able to walk again.

She was readmitted to the Ortho ‘A’ ward of the Bola Ahmed Tinubu orthopaedic section of the hospital, adding that despite having severe pain, LASUTH allegedly kept postponing the surgery.

She also alleged that she was later moved to the Ortho ‘B’ ward under the supervision of one Dr Kayode, who was to conduct the third surgery. But no surgery was performed from 2019 till 2020.

Aremu said she sought alternative medical help at the National Orthopaedic Hospital, Igbobi, Lagos, in October 2020, adding that she was advised that the leg would have to be amputated.

“LASUTH readmitted me and kept postponing my surgery from 2019 till October 2020 on COVID-19 excuses.

I took a COVID-19 test and it was negative. I was still passing through a lot of pain. I went to Igbobi because LASUTH stopped attending to me. Igbobi told me that amputation was the only solution left because my leg had been mismanaged. But I would have to wait till 2021 because of the queue for amputation surgery. LASUTH didn’t tell me the truth from the outset,” Aremu lamented.

She revealed that she attempted to poison herself when the pain became unbearable, adding that she opted to amputate the leg at the Oak Hospital, Ikeja.

She also alleged that one of her doctors at LASUTH was a consultant at Oak Hospital.

She stated, “I opted to have the leg amputated at Oak Hospital, Ikeja. The pain was so much that I once tried to commit suicide. Oak Hospital couldn’t remove the iron that LASUTH inserted in my leg, so they called a consultant to come. It was Dr Afariogun of LASUTH, who came.

“He was surprised to see me. Afariogun told me that he couldn’t tell me the truth, because he was afraid of his seniors at LASUTH. Dr Soga, Dr Afariogun and Dr Ajiboye were the three doctors, who attended to me at the hospital.”

The victim told mentioned that,even now, she is still in pain despite the amputation of the leg and lamented that LASUTH wasted her money and rendered her immobile.

“Even after the amputation surgery, the damage LASUTH did to my leg could not be undone. My left leg is weak and I keep falling each time I try to stand. I have to walk with a frame. LASUTH wasted my money and still damaged my leg. I want justice and proper compensation.”

The Chief Medical Director of LASUTH, Prof Tokunbo Fabanwo, said investigation into the case had begun.

“We are already investigating it. Give us till Thursday. The Director of Clinical Services is going to find out what happened. I will get back to you on Thursday,” he said