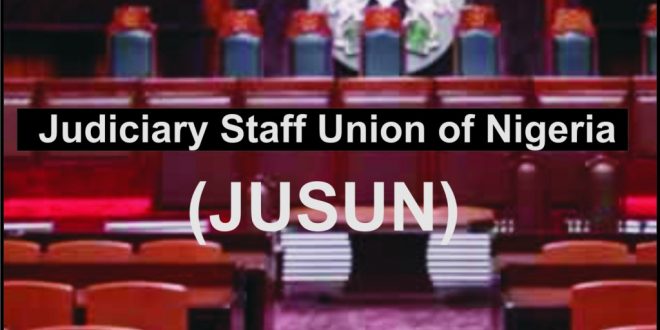 The Judiciary Staff Union of Nigeria, JUSUN, has suspended its two months strike after its National Executive Committee Meeting, NEC.

The Judiciary workers embarked on the industrial action on April to demand the for Full financial autonomy for the Judiciary.

Confriming the development to BarristerNG, the National Treasurer of JUSUN, Comrade Jimoh Musa stated that the industrial action was suspended in reverence to the Chief Justice of Nigeria, Hon. Justice Tanko Muhammed and NJC who appealed to JUSUN to suspend the strike and watch them do the needful.

Comrarde Musa Said……… “We accepted the Appeal and obliged them (NJC and CJN), by suspending the strike effective from Monday to allow them go into the issue and persuade the needful people to do what they are supposed to do, and if after then and nothing comes out, we will come out through another means to fight for what we really believe in”.