Find the latest bookmaker offers available across all uk gambling sites www.bets.zone Read the reviews and compare sites to quickly discover the perfect account for you.
Home » Entertainment » Celebrity » LaLiga: Why Guardiola says Koeman is “ideal coach” for Barcelona 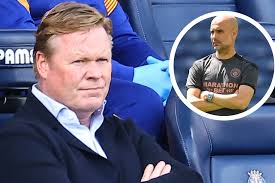 LaLiga: Why Guardiola says Koeman is “ideal coach” for Barcelona

Koeman’s future at Barcelona was shrouded in uncertainty for weeks after an underwhelming 2020-2021 campaign.

But the Dutchman is confirmed to remain at Barcelona for at least another 12 months.

Speaking at the Legends Trophy in Mallorca, Guardiola described Koeman as a strong coach that has a lot of experience, adding that he deserves to be at the LaLiga giants for another season.

Guardiola said: “He [Ronald Koeman] is a friend of mine. Coaches are always in a weaker position when we don’t win, and a stronger one when we win.

I have been at three different clubs, but nothing is comparable to Barcelona or [Real] Madrid, where the repercussions are much greater, where everything is more difficult to control privately.

“I discussed this with Ronald, we are exposed to this. If you don’t want this, do not dedicate yourself to it, but he’s strong and has a lot of experience.

“He’s the ideal coach for next season. I’m very happy and [president Joan Laporta] is convinced. It has been a difficult year for everyone, and Ronald deserves another year, with fans in the stadium. Besides, the second years are always better.

Barcelona finished third in the LaLiga table behind Atletico Madrid and Real Madrid.