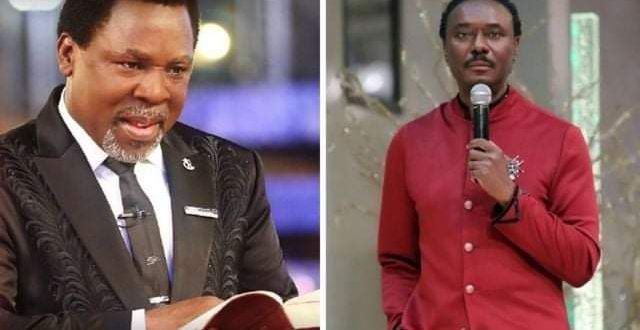 Chris Okotie, Shepherd-in-charge, Household of God Church is under attack by many for labelling Prophet TB Joshua who died few days ago, as Wizard of Endor.

“Okotie goofed…..forget about religion, our culture does not allow anyone to disrespect the dead. He should apologize to the prophet’s family and followers.”

“He is a stupid man. In my culture, they don’t talk bad of the dead. He should have let the be after all we know what he is made of too.”

“Wonder shall never end, can a man of God talk to another man of God in this manner or sound stupidly like this old fool, so TB Joshua is a bad man now and you are the good one right. “

“Rev. Chris Okotie, how would it sound, after you are dead, that someone writes as your epitaph-“the pastor whose two marriages crashed, a pastor who could not handle two marriages. Here lies a pastor who serially lied to us that God told him he wouId be president of Nigeria in 2003, 2007 and 2019”. Go and ask God for forgiveness over that trash you wrote about T.B. Joshua.

Mark it, there would be surprises in heaven. Some of these self-righteous individuals who act as heaven’s gatekeepers, would even challenge God why he allowed some people into heaven -that is, if they themselves even manage to make heaven. This is an individual race. T.B. Joshua has completed his. Focus on your lane while waiting for your turn. So much for self-righteousness.

“As bad as TB Joshua maybe according to you, he was still leaving with his wife and children’s and all his family .

“Mr man where’s your wife and family, you are jumping from one woman to another on Sunday you will come preach the back of the Bible to us Ashaawo.com

Pastor Okotie had referred to T.B Joshua as the Wizard of Endor, deceived millions of people in name of ‘Emmanuel’-

…He was consumed by divine anger of God to answer for his atrocity, Day of the vengeance of our God has fully come to Nigeria and none shall escape

The Shepherd Superintendent of the Household of God Church, Reverend Chris Okotie on Tuesday, shared a cryptic post on his Facebook page in which he referenced a certain “wizard of Endor” who assumed the title of “Emmanuel”.

Okotie further noted that the day of God’s vengeance has fully come to Nigeria though it wasn’t clear who he was directly referencing in his post.

“Hebrews 1:13 says Sit at my right hand until I make your enemies your footstool. The wizard at Endor who assumed the title Emmanuel has been consumed by divine indignation. And now his disciples bewail his ignominious exit.

“No marvel, one-third of God’s angels followed the disgraced anointed cherub Lucifer!! Jesus our mighty gladiator has broken the head of the dragon with his mighty blows.

“He has descended from the mountain of spices with the fiery sword of his indignation. Glorious in his apparel and traveling in the greatness of his strength, he goes conquering and to conquer the adversaries of his church.

“Let those who swear by the Lord and by Malcham and the descendants of Haman, now tremble in fear. The day of the vengeance of our God has fully come to Nigeria. And they shall not escape,” he wrote.