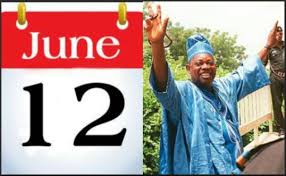 “NIGERIA: Consolidating Democracy and National Unity,” a one-hour documentary about the recognition of the June 12, 1993 elections will debut simultaneously on the Nigerian Television Authority (NTA) and Channels TV networks this Saturday.

Garba Shehu, Senior Special Assistant to the President on (Media & Publicity) made this known on June 9, 2021

The documentary is commemorate the third anniversary of the landmark decision by President Muhammadu Buhari to officially recognize the annulled election and award it’s winner, Bashorun M. K.O. Abiola, the Grand Commander of the Federal Republic (GCFR) national honor.

The film features President Buhari and dignitaries who were central to the annulled election and the events that followed, including General Abdulsalam Abubakar, Asiwaju Bola Tinubu, Kola Abiola, Hafsat Abiola-Costello and Mohammed Fawehinmi, son of legal luminary, Chief Gani Fawehinmi who was also recognized with a Grand Commander of the Order of the Niger (GCON) national honor.

With a sections dedicated to the annulled election, the recognition process and the evolution of Nigerian democracy from Independence in 1960, viewers will be treated to a political documentary on the scale never seen in Nigeria’s film and television history with revelations from key actors.

Filmed exclusively in Nigeria and directed by the award winning, Nigerian-American, Hollywood-based filmmaker Ose Oyamendan, the documentary also traces the evolution of Nigerian democracy and the continuous quest for national unity.

Viewers will also will also see and hear many others including Ambassador Shehu Malami, nephew of Sir Ahmadu Bello and son of Sultan Abubakar III, as they capture the spirit of Nigeria’s independence Day as never revealed before.

The documentary will be shown at 8:00pm on Saturday, June 12, on both the NTA and Channels TV.

Ose Oyamendan is a filmmaker based between Los Angeles, Lagos and London. Prior to studying and earning an MFA in film production from the SCHOOL OF CINEMATIC ARTS, UNIVERSITY OF SOUTHERN CALIFORNIA, Los Angeles, Ose worked as a journalist on four continents with several media organisations, including BBC; NIGERIAN TELEVISION AUTHORITY; WEEKEND CONCORD NEWSPAPER; ASSOCIATED PRESS and FRANKFURTER ALLGEMEINE. He has worked in advertising, public relations and as a paralegal with one of Washington DC’s biggest law firms. Ose was a Program Associate with AMNESTY INTERNATIONAL USA where he worked extensively with the Administration, Congress, the State Department and several NGOs. The experience influenced his one-hour drama, SWAY which was optioned by Fox Broadcasting Corporation. Ose gained valuable studio experience at UNIVERSAL PICTURES where he worked on several projects including THE MUMMY SERIES.
He also holds Bachelors and Masters degrees in Mass Communication from the University of Lagos, Nigeria. He is the Founder of NOLLYWOOD IN HOLLYWOOD, a showcase of Nigerian cinema to Hollywood. His is the Managing Director of O2A Media Corp, a TV/FILM production company based in Los Angeles with production offices on five continents. He serves on the board of a few companies and non-profit organisations.