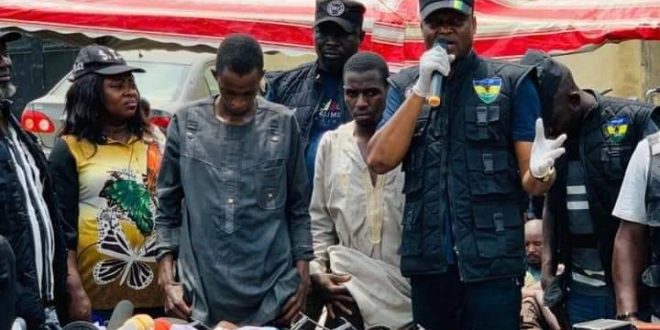 The Commander of the IGP’s Intelligence Response Team (IRT), DCP Abba Kyari, has disclosed how, on regular basis, he is being threatened by members of notorious criminals yet to be nabbed, and expressed disappointment that, rather commending the Nigeria Police for the good deeds of ensuring safety of lives and property, all they get in return were uncomplimentary remarks.

Kyari, in a recent Facebook post said: “I have received more than 100 threats from Boko Haram, bandits, kidnappers, armed robbers and other criminals”, but rather than ruffled, he said “We have sworn to defend our country against all evils, hence we will never relent”.

He said, “Boko haram, bandits, IPOB/ESN, keyboard warriors and their sympathizers can continue wasting their time with threats and blackmails, it can’t work. All the securiy agencies will never relent and all the criminals and killers across the country will be defeated soonest, by God’s grace”.

The exemplary crime buster presented a number of pictures of suspects arrested by his team in the said Facebook post and expressed grave concern over falsehoods making the rounds that no criminals were arrested and that the ones said to have been arrested, have been released.

He said, “My friends, these are some of the bandits, boko haram terrorists and other criminals we arrested; none of them has been released. If those keyboard warriors and sympathizers of criminals spreading false news that bandits are not being arrested have any evidence that one of the hundreds of arrested bandits, shown above, is released or given amnesty, they should show the world.

“We are arresting criminals and killers from all parts of the country. Infact, as you can see above, the overwhelming majority of killers and criminals we arrested in Nigeria today are the bandits and boko haram”, Kyari stated.

The IRT Commander noted that his men were all across the length and breadth of the country, confronting criminals, even in the face inadequacy of manpower.

He explained that, with a ratio one policeman to 700 Nigerians to be protected, “We can’t stop all crimes at once”

His words: “Our teams are all across the country, fighting criminals and killers, and we all know, with Nigerian population today and ratio of 1 policeman to 700 Nigerians, we can’t stop all crimes at once”.

He further said, “All good Nigerians know, with the pictorial evidence above and, with very limited resources at our disposal, we are doing our best with our small unit, IRT, which is a very small fraction of the Nigeria Police”.