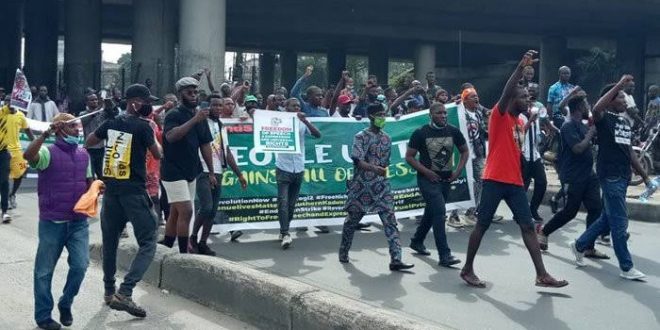 The protests held across the country on Saturday to mark Democracy Day did not live to loud noise, high expectations and uncertainty that heralded it.

Though there were pockets of protests in some states, it was generally a low turnout events. police resistance and arrests, especially in Lagos and the Federal Capital Territory made it happen.

The Lekki area of Lagos, where a bloody ambush on #EndSARS protesters was recorded on October 20, 2020, was mostly calm on Saturday as residents shunned calls for protests.

The Admiralty Circle Plaza and Ikoyi Link Bridge toll gates were the scenes of shootings by soldiers, after hundreds of youths had gathered there to express their grievances over alleged police brutality and poor governance.

Despite rumours of protests in some parts of Lagos, vehicles moved freely on Lekki-Epe Expressway amid the presence of security agents, while pedestrians were seen going about their business as shops and supermarkets were partially opened to attend to customers.

Visibly delighted about the near-calm atmosphere, a resident, Mr Emmanuel Ndubuisi, said the #EndSARS protests had taught Lagosians lessons they would not forget in a hurry.

He said the lessons learnt by residents of the area during the last bloody clash had made them to think twice before embarking on any adventure.

Despite the peaceful atmosphere in the state, men of the Lagos State Police Command, on Saturday morning, fired tear gas canisters at protesters who converged on Gani Fawehinmi Park venue in the Ojota area of the state to demand an end to bad governance. Transport union workers also joined in to disperse the protesters.

They also fired canisters at peaceful protesters at the Ketu area of the state.

The state Commissioner of Police, Mr Hakeem Odumosu, later said five persons suspected to have participated in protests were arrested in front of park, though he added that the suspects had been released.