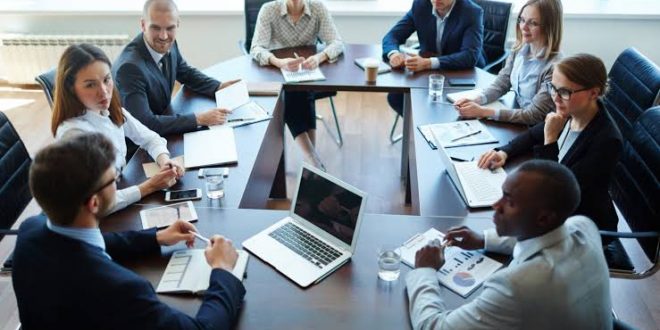 Nigerians love meetings especially the “Face to Face” variety. They meet on and over everything, even the ones that could be settled via phone calls and other communication devices and platforms. And the meetings are statement in unending protocols.

It begins with almost everybody coming late and therefore meetings usually, whether private or public, start well behind schedule. Then the “must do” rituals of reading the minutes of the last meeting, argument over inanities such as timing of speakers and names misspelt etc.. For instance woe betide the Secretary/recorder if titles such as High Chief is rendered as just Chief or completely not included, this must be corrected with due apology before the final adoption of the amended minutes.

Then the” matters arising” from the last meeting and arguments over whether those who did not take part in that meeting could contribute to that aspect of the proceedings will take the better part of another hour. And then a process to “set agenda” for the new meeting followed by head count and apologies from those not present take another sizable chunk of the time .By this time more than two hours is gone and nothing tangible has been achieved. By the time the meeting starts everyone is tired and less productive because of the energy sapping introductory protocol over nothing. And when the meeting ends after four hours or more, everyone is scampering out and giving thanks for surviving the ordeal and plotting how to escape the next meeting.

Between 2004 and 2008, I had the privilege of serving on the Ogun State Economic Summit Group put together by Governor Gbenga Daniel and presided over by Late Tayo Aderinokun who was the Managing Director of GTB. During the first meeting at his Abeokuta home, Aderinokun set the ground rules which he enforced and practiced to the letter throughout the duration of the Group. He told members that meetings would always start at 9am and should end at 10am. He said any meeting that lasted more than one hour was usually unproductive and punitive. So whenever we had our meetings the chairman would arrive at 8.55 am and by 9.00am he would call the meeting to order and at 9. 55am it would be over.

The meetings of the Group under the supervision of Aderinokun were very productive, short and straight to the point without any extraneous issues. He however encouraged members who wanted to bond to do so after meetings. One more thing, he discouraged the art of almost everyone at the meeting harping on a point that had already been made and settled. You could raise another issue but certainly not endless validation of the point of another member of the Group. If somebody makes a point at a meeting and you concur or disagree with that position say so in a simple phrase, it should not be an opportunity to launch into an oration ode or declaration of Manifesto about your ingenuity or dexterity on the Matter at hand.

The Aderinokun Template is how meetings should run at most levels if not all levels; apart from political meetings which are a different ball game altogether. Of course this is not to say that all meetings should always end after one hour. No, not at all. There could be occasions when because of some critical issues or exigencies meetings may well extend beyond one hour. But this should be an exception not the rule.

The current situation where meetings at the family, club, town, private, government and other levels go on and on without setting a time limit is dangerous for all. And in the name of reducing tension most meetings veer off to political and trending issues completely unrelated to the agenda and almost everyone wants to volunteer opinions at this point and precious time is further wasted. There have been occasions where people collapsed during long Meetings either because of health challenges or for not taking any victual over a long period. Others have left meetings battling with health challenges. Just imagine locking people in a freezing room for hours on end or not being able to visit the loo over a long period because you needed to be part of some critical decisions that you fear may be taken during your absence. Meetings have become ordeal for many, they are trapped by the longevity, the inanities and all that.

There are folks who attend more than two meetings spanning over six hours in a single day. I also know some chief executives who preside over four different meetings almost every day. And when you spend the better part of the day and week attending meetings, when and where is the time to implement the decisions of the meetings? The way out is to set a time limits for meetings and arrive at venue well ahead of time and stick to the core of the agenda.
Meetings need not be punitive.

May the Good Lord continue to bless and prosper the legacies of Tayo Aderinokun, former Managing Director of GTB.

Adebanjo, a Media Specialist, sent this piece via obanijesu@yahoo.com.
( The article was written in 2017 and reposted to mark the 10th year anniversary of Aderinokun’s Demise)