Find the latest bookmaker offers available across all uk gambling sites www.bets.zone Read the reviews and compare sites to quickly discover the perfect account for you.
Home » Whistle Blower » Investigation » Service Chiefs, relocates to Maiduguri ahead of President Buhari’s visit 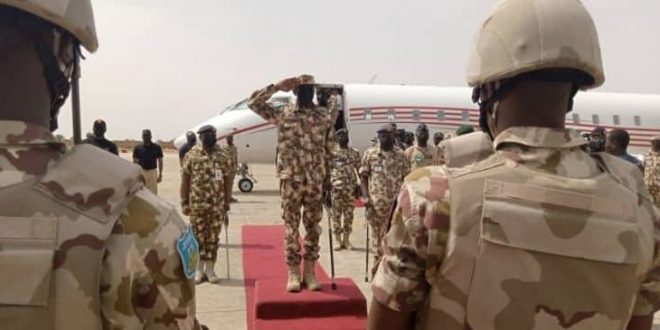 Service Chiefs, relocates to Maiduguri ahead of President Buhari’s visit

The Chief of Defence Staff, (CDS), General Lucky Irabor and other service Chiefs, have stormed the Borno State capital, ahead of Thursday’s visit to Maiduguri, by President Muhammadu Buhari.

Buhari will be in Maiduguri, to assess the security situation in the North-East.

While in Maiduguri, on Thursday, the President and Commander-in-Chief of the Armed Forces, is expected to address the troops, and also inaugurate some completed Federal and State Government projects, in the frontline state.

On Irabor’s entourage ahead if the President ‘s visit are the Chief of Army Staff, Major-General Farouq Yahaya, the Chief of Air Staff, Air Marshal Isiaka Amao, Chief of Naval Staff, Admiral Awwal Gambo, the Inspector-General of Police, Usman Alkali, and the Chief of Military Intelligence.

On arrival at the Maiduguri Airforce Base, the Chief of Defence Staff and his entourage proceeded to the Headquarters of the Joint Task Force, Operation Hadin Kai.

Receiving the top Security Chiefs, The Acting Theatre Commander, Major-General F.O Omoigui said that , the task force has recorded successes in many operations.

“These successes have continued to create a more enabling environment for socio-economic activities.”